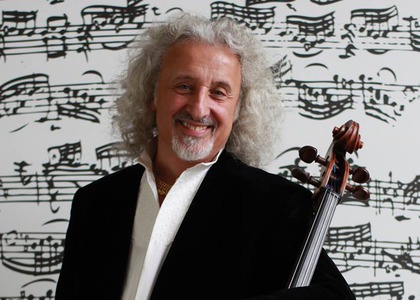 Born in Riga in January 1948, Mischa Maisky has, for the last few decades, been one of the most admired and… talked about cellists in the world, because his way of LIVING music is so intense it often gives birth to controversy. For some, he is a musician who focuses on dramatic expression; for others, he is too theatrical; but everyone can agree on the fact that he is a great ARTIST who transmits the sensitivity of the musical piece he approaches with vibrating generosity. He studied under Rostropovich at the Conservatory in Moscow, but in his final year he was arrested, sent to prison and then sent to a work camp - in his own words, "to literally lay bricks for the buildings of the Soviet Union". For almost two years he wasn't allowed to touch the cello. He managed to immigrate to Israel in 1972 and - even though he theoretically lives in Belgium now - has kept his Israeli citizenship. In his youth, he went to masterclasses in Los Angeles with Gregor Piatigorski and - with honesty - he confesses he had the extraordinary opportunity of working with these two huge cello artists of the 20th century. A nonconformist in his artistic view, Maisky also breaks the mould of the classical musician through his appearance on stage, though he claims that he doesn't want to shock, but merely feel comfortable, as he is an artist who "burns out" on stage, perhaps due to his expressive gestures, so the tailcoat and the bowtie don't really suit him.

There are dozens of written and filmed interviews with Mischa Maisky: he is genuine and has an effortless way about him. I got to know him a bit during our interview over the phone…He is so kind! He is quite charming… so - for only a few minutes of pertinent dialogue - I only tried to get him to talk, to open up, maybe even to confuse him with simple questions…

This is a return to Bucharest...

Absolutely! I have been to Bucharest several times before during the "Enescu" Festival and it has always been a great pleasure to play in the beautiful hall of the Athenaeum for a wonderful audience. I can say I have beautiful memories from my earlier visits in Bucharest and I'm looking forward to this new opportunity and - I hope - other visits in the future!

The audience loves Dvorak's Concerto. Is it also one of your favourites as a soloist?

There are obvious reasons why this work is not only one of the most popular scores dedicated to the cello, but also one of the greatest CONCERTOS in general! Dvorak's work is one of the few concertos for cello that can be compared with great works written for piano or violin - instruments that have been offered a lot more concertos that are extraordinary. But we, cellists, are happy and proud that Dvorak composed such an amazing piece for us. At the same time, I have to confess I do NOT have a "favourite work" or a favourite composer. I actually have a lot of favourites! Every piece I play is my favourite every time I perform it. My intention is to touch the hearts of the listeners, not just their ears or their minds, and in order to achieve this I think that the music has to start its journey from your heart, that is to make music with love! So I only play the music I like so much I fall in love with it when I interpret it… So, for me, each piece is my favourite when I play it…

You have played Dvorak's Concerto countless times over the years, in the company of some of the greatest conductors. You have recorded this opus in different stages of your career (I saw a 1984 recording with Myung Wung Chung, then, after many years, you did the CD with Zubin Mehta and there are many more examples); there have been, probably, some moments during all of this that have become milestones in your evolution as an interpreter.

Of course. For me, Music is a live phenomenon, never the same, in constant transformation. Change depends on various aspects: you, your evolution, your degree of maturity but, naturally, also your interpreting partners - the orchestra, the conductors you play with; it also depends on the acoustics of the hall and many other factors… But I have been incredibly lucky (as you have rightfully mentioned already). Not only did I play this opus on many different occasions, with many great conductors and orchestras, but I also recorded it for Deutsche Grammophon twice: first in 1988 (I think) with Leonard Bernstein and the Israel Philharmonic, and then 15 years later, with the Berlin Philharmonic and Zubin Mehta. It's interesting how different the two recordings are - just the fact that one of them is over seven minutes longer than the other seems incredible, but it's true: amazing! Bernstein was nearing the end of his life and was conducting this work for the first time, which might also seem incredible, because he had a huge repertoire! When we recorded Schumann's Concerto together with the Vienna Philharmonic, it was already the third recorded version of Schumann's score under his baton, but the most popular concerto for cello - the one by Dvorak: that he had never done before! Even he couldn't believe it! He fell in love with this work; he was very interested and excited, but for me it was a great challenge because I had to adapt to his interpretation, which changed every day (I played it 8 times, and each time something was different). I had to play the concerto his way, as it were. With Zubin Mehta, 15 years later, it was a lot easier to play according to my own ideas regarding this score. So the two are very different recordings but I am very proud of the one with Bernstein as well - it wasn't easy at all for me, but I managed to adapt, to be flexible enough. This is, I think, very important for musicians: to keep an open mind, to be flexible and capable of playing different versions of the same music.

It depends, I'm not sure I understood the question correctly… But I have been playing the same instrument for 44 years - actually, this month marks the 45th year since we've met and I fell in love with this beautiful Montagnana cello. And I've never given up on it and, hopefully, probably never will! It doesn't matter what I had to play on this instrument. It's the same cello every time. It's wonderful enough for any sort of music, or at least for the music I play!

In Bucharest, you will collaborate with conductor Christian Badea. Do you two know each other?

I think we have met, but right now I don't remember exactly if we've ever performed together, too. I will look it up in my database because I have to confess that recently I've realized something depressing: my computer has started to have a better memory than mine! (laughs) I have over 4000 concerts in my database of the concerts I'd performed in the last 45 years because it is quite difficult to remember them all sometimes. I will check. I should have checked before the interview, to be prepared a little, but I haven't managed to, so please excuse me…

After the two evenings in Bucharest you will be leaving for South America, where you will play Beethoven's Triple Concerto.

Not only that, but also a packed schedule with trios. Just yesterday, I came back from China, with Lili and Sasha, my two older children. I have a big tour with them in Japan in September and now in South America, where we will also have mixed recitals, with solo, duo and trio pieces, as well as a schedule with great trios from Russian musical literature, including trios by Rachmaninov, Shostakovich, Tchaikovsky… I can say it's a very busy year.

Thank you for your time and we can't wait to have you at the Athenaeum!

It's been a pleasure, thank you and I'm glad to be back on the stage of the Athenaeum, in beautiful Bucharest.