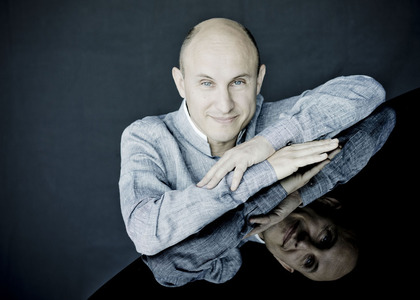 Mr. Nelson Goerner, welcome to the fourth edition of RadiRo - the only international festival devoted to radio orchestras! First of all, we would like to say that Radio România still has the recordings of your concerts from years ago. In fact, I have recently listened to and also scheduled to broadcast a recording of one of your remarkable concerts: Piano Concerto in G Major by Maurice Ravel, performed by you at Sala Radio back in 2000. Having been to Bucharest before and performed here, how do you remember that experience?

Well, I always remember my experience in Bucharest as being very friendly and warm-hearted. It's a city I have visited several times. I think I visited it for the first time in 1991, if I remember correctly... I came back to Bucharest several times over the years. It is indeed a place that is close, very close even, to my heart. I am very eager to be back after years of not performing here.

What do you think about a festival devoted solely to radio orchestras?

It is an ongoing challenge to keep the radio going for those passionate about classical music. What role did the radio play in your development as an artist? How did it influence you, both as a professional and as a music lover?

As a music lover, I would say that the radio had an enormous influence in my development. It was through the radio that I came to discover musical masterpieces. For example, I clearly remember the first time I heard Liszt's Piano Sonata in B Minor. It was during a radio broadcast! In Argentina when I was a teenager! But there are many other pieces I discovered like this. For this reason, I believe that the radio is still a unique means that can popularize masterpieces of classical music. That's why I was saying that the fact that a festival devoted to the radio is taking place, and its power to propagate the music, is a truly amazing thing, at least from the point of view of music lovers all around the world.

But even as a professional I'm sure you have plenty of memories linked to the radio.

Of course, quite a lot, because my concerts were frequently broadcast on the radio over the years. For an artist, it is an amazing thing to know that while he is performing on stage he is not only performing for those who bought a ticket, but he is also able to reach a much more extended audience, not just from one country, but many others. This is what happens when a concert is broadcast through the European Broadcasting Union.

On Saturday, November 24th, you will perform as a soloist in Mozart's Concerto No. 24 - a unique masterpiece, certainly. It is the only one among Mozart's concertos that finishes in a minor chord, a concerto appreciated and admired by Beethoven, as well as Romantic-era composers such as Schumann or Brahms. What do you think about this piece? Do you see it as being a wholly classical piece, a Romantic piece, or do you think that both labels are wrong?

I think it is a strong mix between the two, and we cannot talk about a certain style when we talk about this piece because it is so unique. There's more than one side to it, which makes it hard to categorize. However, I understand why Schumann, Brahms and Beethoven appreciated this piece so much. It creates another world, especially if we were to compare it to concertos composed before the one in C minor. It's extremely clear, it becomes very clear that it gives way to a new era, in which drama becomes an integral element in the piano concerto. Prior to that, however amazing they were, piano concertos were based on a certain virtuosity, while this concerto offers something completely different quite abruptly, from it's very beginning. Something more profound, more tragic. And tragedy was not a common element in Mozart's concertos before the concerto in D minor.

Do you remember the first time you performed Mozart's Concerto No. 24?

Yes, I remember that very well because I was a student at the Geneva Conservatory of Music and all Maria Tippo's students were to perform all of Mozart's concertos. This one was given to me, and this is how I discovered and performed it for the first time.

Was that your first collaborating with Orchestra della Svizerra Italiana and Vladimir Ashkenazy as a conductor?

No, I have performed with the orchestra a few times before, but it is my first performance, actually my first time meeting conductor Vladimir Ashkenazy and I can't wait for it to happen.

Speaking of Vladimir Ashkenazy - a music legend nowadays - what do you appreciate about him as a pianist, or even a conductor?

I do indeed believe he is one of the greatest pianists today, with a vast repertoire, and in all his performances there's integrity, amazing interpretation, the sound... His recording of Chopin's Études always comes to mind, for example. It became a point of reference for many years and it still is today. I also remember his performance here in Geneva, long ago, when he played some of Beethoven's sonatas and Prokofiev's Piano Sonata No. 8, it was an absolutely fantastic evening, the technical strength he displayed and his extraordinary talent for drama in music. He's a great musician and I am glad I have the opportunity to work with him.

Generally speaking, does the venue influence you in any way? Do you feel the energy of the audience, for example, and does it affect your mood?

It is very difficult to foresee it, because sometimes I go somewhere and I have no idea what to expect from the audience or how I'll be feeling on stage. I don't have any prejudices, sometimes I have pleasant surprises, or I am moved when I least expect it. It is hard to say, but I know some things about the Romanian audience and I have the pleasure to have among them some very dear friends that I haven't seen in a while, and this is a very special thing for me.

Do you know any Romanian musicians? Do you have friends among them?

Of course. I performed many times together with conductor Horia Andreescu, a very dear friend of mine. I think, if I'm not mistaken, that the last time I was in Romania I performed Ravel's Piano Concerto for the Left Hand with him as a conductor. Another dear friend of mine is Valentin Gheorghiu, the great pianist, who I admire very much. I had the pleasure to have his daughter, Valentina Gheorghiu, as a student in Geneva. I can't wait to meet all my friends, it will be a precious occasion for me.

Now, Mr. Nelson Goerner, let me, please, read from one of your past interviews. "I adore Schumann, and Brahms as well, again, there's an important link that I will try to explain. If you perform Bach well, that will always help you perform Mendelssohn, Schumann, Brahms, and any other composer from then on. Fundamentally, Schumann and other Romantic-era composers owed a lot to the classics. Think about how fond all these composers were of Bach's music." Could I ask you to expand more about Johann Sebastian Bach, Mr. Goerner? You recorded many Romantic-era pieces, but not Bach, or at least not yet.

Yes, I intend to do it in the future and it somehow didn't happen yet because, even though I studied all his compositions over the years, there was a time when I didn't perform Bach in concerts at all. I felt like I was not ready, I felt that I still had to discover myself in that music, to go deeper into Bach's message. I wasn't ready and I waited for a while. I recently started performing Bach in concerts, 4 or 5 years ago, and I do it more often now. There will probably be a recording sometime in the future, but, I am saying this again, I consider him the father of all composers, he encapsulates all the music that came after him, being, at the same time, a synthesis of medieval music. Therefore, I felt like I needed time, so I am taking my time now, to explore his music in depth.

So we hope to listen to you performing Bach in Bucharest in the future!

Maybe there will be a Bach encore on November 24th.

Does your discography loyally reflect your repertoire? Because I suppose you are not the only one who decides what music you're going to record, right?

I would say it reflects some of the pieces that I perform, because when it comes to concerts my repertoire is much bigger than you would expect from my discography. For example, Debussy is a special case, because, just as in the case of Bach, I felt I wasn't ready to perform his compositions and I needed more time to study him. Finally I was able to perform his pieces and I recorded a CD as well. Therefore, my discography reflects some of my musical interests, some of my passions, some of the things I experimented with. However, I repeat, it is only a partial reflection.

Are there any personal projects that are dear to you, some recordings that you are working on? You have already mentioned Bach.

Yes, Bach is one of them, but it will not happen next year, because then I'll be recording Johannes Brahms's solo piano pieces for the first time, especially Sonata No.3 in F Minor together with the first book of Paganini's Variations. This is my next project.

"Extraordinary at playing Chopin, beyond any doubt excellent at playing Debussy, the Argentinean pianist Nelson Goerner is one of those discreet artists with a great career." says Le Monde. You were a special guest back in 1999 during a Chopin Festival organized by Radio România Muzical. How did your story with Chopin start, Mr. Goerner?

The story started when I was 6 years old and I had some recordings of Arthur Rubinstein performing all of Chopin's Nocturnes on vinyl, that's how it was back then. There were other compilations by Rubinstein, called "The Chopin I love". There was a waltz, a mazurka, a ballad, a collection of pieces. These were, in fact, the first recordings I had ever heard and held in my hands. This is how everything started. Then I spent I don't know how many years of my life studying his pieces, always with the same fascination, pleasure of discovery, passion and a lot of other things I cannot put into words because they mean so much to me.