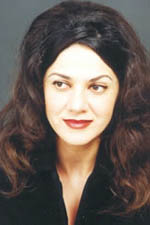 Tuesday, 15 December 2009 , ora 14.07
The snowflakes outside were the perfect environment for the carols which soprano Mirela Zafiri recommended on the album that was launched on Tuesday, December 15th 2009, at the 'Eugen Preda' Press Centre within the Radio Romania headquarters. Entitled simply Carols for Mother, the album consisting of three CDs was specially created in an intimate manner, suitable for the Christmas evenings spent together with the family. The three CDs illustrate three distinctive moments:

The annunciation of Jesus Christ's birth
The moment of the birth, with lullabies from the international repertoire, performed both in the original version and in Romanian
The path Jesus Christ showed us.

In order to illustrate these three important moments, Mirela Zafiri chose a varied repertoire, with both traditional music, performed in a different tonality with the help of Catalin Târcolea's orchestration, and famous works by Shubert and Gounod (Ave Maria, for instance), performed in the same original manner. Last but not least, besides traditional music, first audition songs can be listened to, especially on the third CD. These are carols created by contemporary composers such as Felicia Donceanu, Carmen Petra Basacopol, Nicolae Coman and Doru Popovici, works which are inspired by Byzantine creations and are presented in an up-to-date form.

On the occasion of the launch, Mirela Zafiri mentioned that she had devised the album as a whole and, talking about the interpretation, beyond the original idea of the title and the music, the soprano emphasized the "soul" related nature of her version. Essentially, these are carols for mothers, a beautiful gift for every mother in the world. It was soprano Mirela Zafiri, the creator of the album, who talked to us about the idea of the album, in the end:

'I have been singing these carols together with my family since I was a little girl. Ever since I was three, I used to go carolling in my native town, Lugoj. My parents had the custom to go carolling three days in a row. It was the most natural title I could have given to this album. Every carol was meant for my mother, because my mother is a very harsh critic of the things I do. As my mother is from Banat, I called her and discussed the lyrics with her, especially because many of the words are regional, belonging to the Banatian dialect, and I had to ask for her opinion and advice.'
Ioana Marghita
Translated by Cristina Caramida and Valentina Tache
MA Students, MTTLC, Bucharest University
Return to archived Chronicles