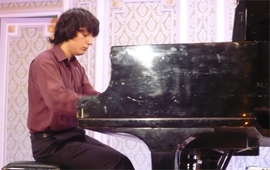 Tuesday, 24 November 2009 , ora 14.38
Tuesday evening, on November 24, the Studio Hall of the Romanian Athenaeum became crowded with spectators, as they came to see the young Cristian Sandrin's piano recital.

Born in 1993, Cristian is a student of the "Dinu Lipatti" Music High School, in the class led by teacher Marina Dragomirescu. He performed in Bucharest, Râmnicu Vâlcea, and in May 2009 he made his debut in a concert with the Philharmonic Orchestra of Târgu Jiu. He also took part in recitals held by "Remember Enescu" Cultural Foundation and in the radio show called Today, Tomorrow's Musicians (Muzicieni de azi...muzicieni de maine) .
.
Cristian Sandrin won many first prizes at both national and international contests, among which: "In Memoriam Liviu Dandara", "The Golden Lyre" ("Lira de Aur"), "In Memoriam Modest Iftinchi", "Pro Piano", "Mihail Jora", the National Music Olympics. He also participated at the "Iuri Bukov" International Contest - Sofia-Plovdiv, where he was awarded the "Ivan Spasov" special prize.

The concert opened with Trio in G major KV 564 by Wolfgang Amadeus Mozart, during which the young musician was also accompanied by Iulia Cazacu - violin and Stefan Cazacu - cello. Besides the pianist's shortcomings, Mozart's piece was performed passionately, as the three musicians managed to synchronize and involve the public into a dialogue.

Although the Mozart score caused the young pianist yet other difficulties, perhaps nervousness overwhelmed him, towards the end of the recital, Cristian Sandrin managed to prove that he possesses a solid technique and a power to communicate with the public which will make him grow into a self-confident and talented musician with a bright future ahead.
Adriana Nitu
Translated by Andra Stroe and Valentina Tache
MA Students, MTTLC, Bucharest University
Return to archived Chronicles