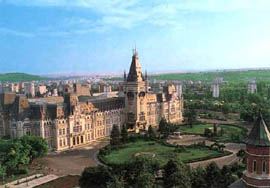 Sunday, 11 October 2009 , ora 11.05
If you are feeling anxious about the idea that the number 13 might bring bad luck, it is not the case here. As you can see, we have managed to correct this little-loved-by-so-many number through working on this festival. For us this edition, as well as all the previous ones, means a reunion with Romanian music that deserves the attention. The Romanian Music Festival started in the autumn of 1969 in Iasi. Of course there were years when, due to material difficulties or issues of a different nature, the Festival was not held. There was even a time during the '90s when the Festival was incorporated in the Bucharest Festival of Contemporary Music, but the Romanian Music Festival has always been hosted in Iasi, a city whose cultural institutions have participated in almost every edition.

This year, between October 11th and October 16th, we have some remarkable guests: The Choir of the T Gheorghe Dimat Music Academy of Cluj Napoca, Capella Transylvanica, Ad libitum Quartet, and The Quartet of the Iasi Philharmonic. In other words, work is being done here too, and people of great culture and great taste in music in Iasi.
Bujor Prelipcean
Statement taken by Andreea Chiselev
Translated by Alina Maria Bucurel, Elena Gheorghe
MA students, MTTLC, Bucharest University
Return to archived Chronicles