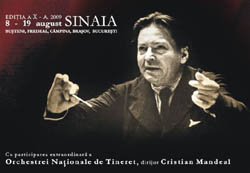 George Enescu and the Music of the World Festival

Tuesday, 18 August 2009 , ora 11.37
At a time when the whole Romanian society discusses or senses the economic crisis, there are projects that move ahead, even adding a certain value, due to the absolute dedication of their initiators.

This was my first thought after last night's (August 18th, 2009) concert at the Romanian Athenaeum, part of the 'Enescu and the Music of the World' Festival organized by the 'Friends of Music - Serafim Antropov' Foundation, Sinaia City Hall and Sinaia European Cultural Centre.

Already at its tenth edition, the festival has become one of the most important and full of opportunities Romanian musical events including classical music, as well as world music and jazz recitals, which take place mainly in Sinaia - the town that George Enescu felt extremely close to, but also in Bucharest, Brasov, Busteni, Predeal, Câmpina, in usual or unconventional locations.

One of the major projects related to this festival is named the National Youth Orchestra. It is made up of young people of 16 to 25 years old - pupils and students who came from Bucharest, Cluj, Timisoara, Brasov, Sibiu and Oradea this year - young people selected by the man behind most of the events of the 'George Enescu and the Music of the World' Festival: cellist Marin Cazacu.

Internationally renowned soloist, professor at the Bucharest National University of Music, Marin Cazacu knows the realities of the Romanian musical education system very well; he knows that most of the young instrument performers will not have a career as soloists, but as members of an orchestra; however, school is not enough to teach one what it means to be a good instrument performer in an orchestra.

Starting August 10th, the 65 musicians who made up this year's National Youth Orchestra have prepared for the three concerts in which they were going to perform during the 'Enescu and the Music of the World' Festival for a week. During the first three days, their work was done on groups of instruments under the coordination of violinist Liviu Prunaru - concert-maestro of the Amsterdam Concertgebouw Royal Orchestra, of violist Marius Nichiteanu - soloist of the Hamburg Broadcasting Corporation Orchestra, cellist Marin Cazacu - soloist of the 'George Enescu' Philharmonic Orchestra, Dorin Marc - first-contrabassist of the Philharmonic in Munich and professor in Nurnberg and Adrian Petrescu - first-oboist of the Philharmonic in Bucharest.

The conductor who took over the National Youth Orchestra afterwards was Cristian Mandeal, the director of the Philharmonic in Bucharest, a highly appreciated conductor both in Romania and abroad.

After a 'warming up' concert on Monday, August 17th, in Busteni, the National Youth Orchestra performed last night on the stage of the Grand Hall of the Romanian Athenaeum. Either because it was summer, or because the orchestra was exclusively made up of young people, everyone had given up the traditional concert attire; and even the conductor wore an extremely youthful white coat over a black shirt.

The performance included 'hits' of the classical repertoire exclusively: Rhapsody op.11 no.2 by George Enescu, Concerto in E Minor for Violin and Orchestra by Felix Mendelssohn and Symphony No.8 by Antonin Dvorak. From the very first sounds, we realized that it was a youth orchestra; however, it was one made up of professionals. Cristian Mandeal has the great ability of making the best of an orchestra, so what we listened to was a harmonious, smoothly-sounding ensemble that could successfully compete with an experienced Romanian orchestra performing in a season concert anytime.

Nonetheless, the revelation of the evening was Ilian Gârnet, the violinist who performed the soloist score of the difficult concerto by Felix Mendelssohn. He was born in Sankt-Petersburg to Moldavian parents and he studied in Chisinau; he performs in concerts abroad as a Romanian citizen. He is 26 years old and he won the third prize in one of the most difficult contests in the world - 'Queen Elisabeth', held in Brussels, in May 2009. If I were to compare him to one of the great young violinists of the moment, I would choose Vadim Repin, a cerebral, introvert Russian violinist, whose performances have an undeniable technical quality, while moving the audience without using any outside embellishment.

The National Youth Orchestra conducted by Cristian Mandeal will present the same programme today, August 19th, as well, starting at 19:00 pm at the Sinaia Casino. It is the last concert within the 'Enescu and the Music of the World' Festival, an event to be closed, by tradition, on the very day of George Enescu's birth. George Enescu was born 128 years ago today; I believe that one of the most honest and efficient ways of celebrating Enescu's spirit is to pass on the experience gained in a lifetime of work to the future generation, just as Cristian Mandeal and Marin Cazacu do with such dedication, and just as Enescu did as well.

The Romanian classical music will never undergo a crisis as long as projects such as this one exist.
Cristina Comandasu
Translated by Silvia Bratu
MA Student, MTTLC, Bucharest University
Return to archived Chronicles