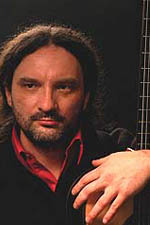 Tuesday, 30 June 2009 , ora 11.43
I had again the chance to ascertain how much the guitar is loved by the public, irrespective of their age or stock of cultural knowledge, and especially the extent to which the sonority of this instrument is loved by young people attending the first two concerts in a range of eight, scheduled for Thursdays under the generic title of the SUMMER GUITAR SHOW. Paraphrasing Marcel Proust, the subtitle In Search of Lost Beauty tries to offer more than an incursion into such a vast repertoire of the instrument, illuminating very different époques and styles...

When uttering BNR - we automatically think of values, of a... treasury! Almost opposite to the widely discussed building of the National Bank of Romania, another edifice displaying the "initials" BNR hides away a different kind of treasure - a cultural one, to which we all have access. Here, in the rotunda of the central headquarters of the National Library of Romania the organizers of the Summer Guitar Show (The Cultural Association Kitarodia in partnership with the National Bank of Romania, supported by the Administration of the National Cultural Found) proposed to develop a project aimed at reaching a wide audience, by choosing accessible music, for the naturalness of its communications and its ability to open up towards other types of artistic expression.
The first recital in the range (on June 18th 2009), performed by the guitar player Maxim Belciug - occasioned not only an encounter with musical pages of high cantabile manner picked up from the Russian Romantic creation, but also from the specifically Latin one (with percussion accents marked by Alex Sturzu), but also the chance to listen to a splendid selection of texts lectured by Gabriel Spahiu (text stalker being Lucian Popa). The idea of including dance passages as well was also a very special one, provided with care for detail (sometimes also with modesty) by the couple Itrina Opritescu - Stefan Filip.

After a week (on June 25th 2009) the same setting also served to highlight the harmony and rhythm of the music through an exclusive tango programme, offered by the guitar duo Tudor Anghelescu - Mihai Melinescu. Distinct expressive physiognomies (the way they exposed themselves in this recital) made a conquest of their audience that seemingly exceeded the expectation, so that the seats were insufficient for those who wanted to enjoy the SUMMER GUITAR SHOW as the two players found in the joy of the interpretative dialogue and the "resonance" required by such repertoire. They also have this chance in the next six Thursday evenings, from 19:00, in the rotunda of BNR...
Anca Ioana Andriescu
Translated by Heleanu Mihaela Liliana and Elena Cigareanu
MA Students, MTTLC, Bucharest University
Return to archived Chronicles