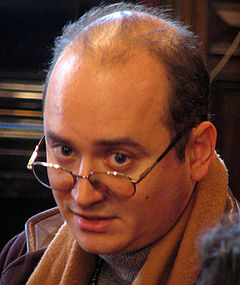 Saturday, 30 May 2009 , ora 11.59
The International Week of New Music ended on Saturday, the 30th of May 2009, at the same venue where it started on the 23rd of May: the National University of Music in Bucharest. The premiere of Dan Dediu's third opera, entitled "Eve!" - presented to the public under the form of a concert - was among other events scheduled for the last day of the festival. The accompaniment, which had initially been intended for a chamber orchestra, was provided by the author who played the piano and by a men's choir.

Taking into consideration the subtitle - "Homeopathic Opera in One Act" it seems that with this opera, based on a sketch by Matei Visniec, the composer's intention was to administer a potential musical treatment against the daily routine. Humour, irony and also a pinch of absurd spiced up the story of the two characters, He and She, a story rendered by soprano Laura Dumitriu and baritone Adrian Prelucan that seems to have been taken from day-to-day life. Characterized by polystylism, "Eve!" used quotations taken from famous works and passages composed according to rules specific to different styles thus covering the great eras in the history of music.

The polyphony of the Baroque and Mozart's quavers melted into romantic harmonies reminiscent of Puccini's operas and reached the present day with Philip Glass' minimalistic music, but not before making a short stop among the pages of a distorted "Carmina Burana". While listening to this opera I had the impression that the time contracted as if for a few minutes I had browsed through a photo album depicting a man's entire life with all its moments of happiness, passion, search and nostalgia.

At the end of the performance, the composer Dan Dediu revealed his reasons in choosing "Eve!" as a title for this opera:

Dan Dediu: Matei Visniec gave no title to this sketch but there is one line which brings forth this name, Eve: He calls Her Eve. Therefore, I induced that the character is Eve, but in the same time Eve is also the mother of all women, the Archetypal woman. She is in fact the reflection of femininity as captured through the lenses of masculinity. The opera had been planned to be performed by a chamber orchestra at the festival, but because of various organizational reasons that was no longer possible. We will probably be able to present it as planned in the near future: the singers have learned their parts, they are eager to detach themselves from the musical score and I hope that in the autumn or in one year from now, at the latest, we will have it as a performance, a show.

And the composer Nicolae Coman shared his thoughts with us:

Nicolae Coman: I am impressed with this work which has real comical qualities and it is composed based on a musical polystylism of an extraordinary virtuosity peculiar to Dediu's mentality and style. Brilliantly performed at the piano by the composer-orchestra and by the two wonderful soloists, the work fully capitalizes on Matei Visniec's dry humour, creating a true masterpiece of polystylism. It is something that begins with the Baroque and reaches our day, passing through Mozart and Puccini. It is a wonder when it comes to humour and lively, keen spirit, full of irony and tenderness, modernism and nostalgia at the same time. In its own way, it is a masterpiece that charmed the entire audience from its very first audition and - I am sure - it will continue to charm any audience in front of which it is performed.
Alexandra Cebuc
Translated by Dorina Burcea
MA Student, MTTLC, Bucharest University
Return to archived Chronicles