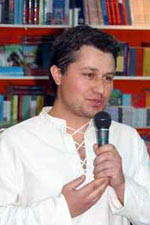 The Anton Pann Ensemble, once again at 'ookshop and Music

Friday, 22 January 2010 , ora 12.14
The 'Bookshop and Music' project, launched by Radio Romania Music in partnership with the Humanitas Bookshops, brought about a new recital by the 'Anton Pann' Ensemble, performed in front of music and book lovers.

On Friday, January 22nd 2010, the band focused on old songs whose charm was enhanced by the fact that they are part of our cultural identity. This is a very picturesque genre in which the melodic line always requires improvisation. Therefore, the same song seems different with every performance.

Among the six songs interpreted during the concert, the audience had the opportunity to listen two musical pieces which were not of Romanian origin. The first of the two, 'La Rosa Enflorense', which was actually the one that opened the recital, is a XIV century song from the repertoire of the Sephardi Jews from Spain and its exotism animated by mordents and sinuous inflections made a strong impression on the audience. The second song not belonging to the Romanian repertoire was 'Schearanzulla Maranzolla', which comes from the Italic Peninsula, more precisely from Sicily. During the rest of the recital, the ensemble performed Romanian musical pieces from the work of Anton Pann and Dimitrie Cantemir, all of which were exceptional.

Such a repertoire is not approached too often, so when we hear it performed by ensembles such as 'Anton Pann', it represents an opportunity to look at ourselves in a mirror in order to see where we come from and, why not?, where we are going.

What seemed to me a very good idea is that the ensemble conducted by Constantin Raileanu proposed an interactive approach of the event. Thus, it was ready to answer questions from the audience, which proved to be rather shy from this perspective. However, I am sure it will show more courage at the next recitals of the band, because the 'Anton Pann' ensemble is to give a performance every month at 'Bookshop and Music'.
Petra Gherasim
Translated by Oana Ludmila Popescu and Valentina Tache
MA Students, MTTLC, Bucharest University
Return to archived Chronicles