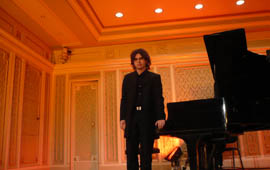 Tuesday, 12 January 2010 , ora 12.17
The first concert of 2010, which was part of the Tuesday Night Season at the small concert hall at the Athenaeum in Bucharest, brought into foreground young pianist Dragos Dimitriu born in Brasov.

Dragos Dimitriu was born in 1991 in Brasov, and studied at the 'Johannes Honterus' Theoretical High School and at the 'Tudor Ciortea' Arts High School. At the moment he is studying with teacher Corina Ibanescu.

Between 2003 and 2008 he was awarded 30 national and international prizes, such as George Georgescu (Tulcea), Orpheus (Târgu Jiu), Mozart (Târgoviste), Ina Macarie (Bucuresti), Czerny (Piatra Neamt), J.S.Bach (Cluj) and he also took part in the International Music Festival in Fundao (Portugal, 2007), where he was awarded the prize for the best performance of a Portuguese work. As a result, he was then invited to perform recitals in Porto, Fundao and Pacos de Brandao.

The young pianist studied virtuosity with Frank Wibaut, Augustin Vergara and Horia Mihail. His debut as a soloist was in 2008, when he performed along with the Philharmonic Orchestra of Ploiesti conducted by Ion Ionescu-Galati. Afterwards, he performed concerts with the philharmonics of Sibiu, Târgoviste and Botosani and with the National Radio Chamber Orchestra. He also worked as associate with conductors Romeo Rambu, Ladislau-Petru Horvath and Cristian Brâncusi.

In 2003, pianist Dragos Dimitriu performed a series of recitals in France, where he gladly received enthusiastic reviews. In 2008, he was awarded the SoNoRo Interferences scholarship, during the SoNoRo International Chamber Music Festival and was selected to perform at the National Museum of Art in Bucharest.

In May 2009 he was invited to perform a recital at the Young Artists Gala which took place at the Arcus Cultural Centre in Covasna. During this time he played in Romania and also abroad: in Brasov, Bucuresti, Galati, Cluj, Piatra Neamt, Ploiesti, as well as in Austria, France and Portugal.

For this year's first edition of the Tuesday Night Season at the small concert hall at the Romanian Athenaeum, Dragos Dimitriu proved he possessed many of the gifted qualities a distinguished pianist needs: a solid technique, intensity, sensibility, an ability mature enough to live the artistic act and, extremely important, to share it with the others. We will certainly hear again many beautiful and interesting things regarding the young pianist
Adriana Nitu
Translated by Georgiana Mindru and Valentina Tache
MA Students, MTTLC, Bucharest University
Return to archived Chronicles