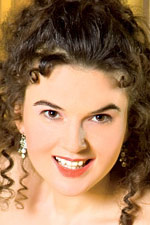 Tango Emoción at the National Opera in Bucharest

Tuesday, 9 February 2010 , ora 12.56
Who hasn’t seen the film „Scent of a woman”?! Al Pacino’s tango scene in this production came into my mind during a magnificent show, first presented on Tuesday, February 9th 2010, in the Yellow Foyer at the National Opera in Bucharest. The passion for the Argentinian tango sprang up a „story scene”, imagined by the mezzo-soprano Oana Andra (photo) and named Tango Emoción. The artist’s scene partener in this project – included within the Ballet and Opera Experimental Studio “Ludovic Spiess” under Valentin Roşca’s direction and choreography – was the baritone Andras Chiriliuc.

Everyting started from the music of 17 famous tangos, most of them selected from the creation of the composer Carlos Gardel, but also Astor Piazzolla’s or Juan Carlos Cobian’s; the two protagonists reproduced in original the lyrics created, among others, by Carlos Gardel and Horacio Ferrer and the dance and the video projections pigmented the action of the play with a Latin touch, out of which, of course, could not miss„The gelous husband”, interpreted by Eugen Bobu. Mihaela Vîlcea was responsible for the piano accompaniement which joined characters’ speeches during the entire action, adapting different „comments”in the registration plan.

The symbol-objects as a mask and a statue, but also the gradual intensity of the light – suggesting the day, the nightfall and the night – meant the means by which the music described a story told in present time in whichthe specific human emotion, the passion and the illusion were rediscovered; and even if the Latin temperament was outlined, we did not escape the impression of a permanent nostalgia, connected to the passage of time, but maybe the white-black video projections, showing Buenos Aires of the `30, are to blame. Review by Alexandra Cebuc

“Tango Emoción is an exceptional show and I hope it is received by the public with great passion and keeping with the dedication we feel when we sing and dance. The tango is an unique phenomenon, seductive, passionate, and for many people it is even a lifestyle. It is a credo of intense feeling of the entire nature, a wish to live through a dance where you can not be ignore your partner, but you are lost in the other ego’s.

„Tango Emoción” - a passional story scene imagined by me based on 17 famous tangos - is a dream of love for ever possible, for ever wanted, an escape from the reality brutalized by aggressive and depersonalizing rhythms in a world of intense authentic feelings, a world where there is no solitude, where the other is always present in your heart. In this show I sing and dance together with the baritone Andras Chiriliuc, accompanied at the piano by Mihaela Vâlcea. The direction and the choreography are done by Valentin Roşca and the scenography by Viorica Petrovici.

I think it is one of the most modern shows ever seen at the Opera or at the Experimental Studio and we bring new meanings, much more profound to the story we imagined. I really think it will surprise a lot of people; I hope in a pleasant way...”
Statement taken by Larisa Clempuş
Translated by Zenovia Popa, Ramona Grama
MA students, MTTLC, Bucharest University
Return to archived Chronicles