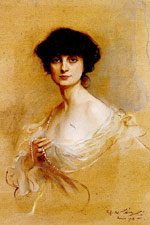 What first stroke us when entering the hall was the large public – from the bourgeois society of the so called Parisians-Romanians settled in France long time ago to École Normale de Musique students, to the young and old people, the audience turned to be varied and enthusiastic. The evening opened with the speech of Magda Cârneci, manager of the Romanian Cultural Institute in Paris, followed by the speech of Eugenia de Bracovan, the niece of the poet Anna de Noailles. .

The concerto was conceived as an alternation of recited poems and music. Actress Lucia di Carlo recited Anna de Noailles’s La vie Profonde and Exaltation in a sensible and elegant manner.. We noticed the musical figure of pianist Andrei Vieru who accompanied very accurately and with great assessment four songs, Poèmes grecs by Louis Vierne, written by Anna de Noailles. Soprano Mihaela Mingheraş blended rather difficult into the musical atmosphere because of her flat timbre and the monotonous approach of the score (even if she interpreted Vierne’s lieder , Saint-Saens’ work for violin, piano and soprano Violons dans le soir or Respighi’s Il Tramonto, a work written in a veristic style and impressionistic colourful harmony).

Lalo Quartet, consisting of musicians of the Lille Orchestra – Fernand Iaciu, Ines Greliak, Anne Le Chevalier and Jean Michel Moulin – was genuine as for the chamber uniformity in Ravel’s Quartet despite of the performance which was rather insipid. Fernand Iaciu, the violinist of Romanian descent, made himself remarked through musicality and feeling in Saint-Saens’ Violons dans le soir.

Andrei Vieru, a cultivated and introverted musician, performed Skriabin’s Black Mass in a very poetic and unusual sound, but he did not underline sufficiently its «devilish» and passionate character.

It was an interesting evening which may have seemed rather long because of the lack of structure for each moment’s particular intensity and their uniformity altogether, taking into account the participants’ musical qualities.
Ana Giurgiu-Bondue, composer
Translated by Georgiana Mîndru, Ramona Grama
MA students, MTTLC, Bucharest University
Return to archived Chronicles