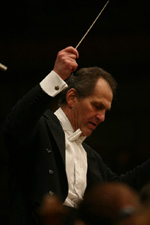 Thursday, 19 August 2010 , ora 13.42
I flinched with interest and surprise from the first musical sounds interpreted by The Romanian Youth Orchestra; the vivid pace, and powerful blast of the symphonic poem Don Juan by Richard Strauss, the opening song of the concert, showed from the very beginning the energy, the expressivity, the rich, full, ample sound, of musicians.

In Prelude and The Death of Isolde, even if signed by Wagner –maybe one a too little romantic – the orchestra marvellously interpreted the moments of musical suspense, of sharp contrasts, of sighing, in a word, all the Wagnerian musical rainbows.

The Forth Symphony in F minor by Tchaikovsky, although a little too fresh because of a yet youthful thinking, was impetuous, passionate, and in the 3rd part, the "hit" of the work performed by pinching the strings, the musicians yielded fun and seriousness in equal doses.

The program was well chosen to use up all the temper and excitement characteristic of the young who feel at ease with the freedom and excesses of romanticism. It made a perfect match with the excellent brass and cello interpretation, which really stood out.