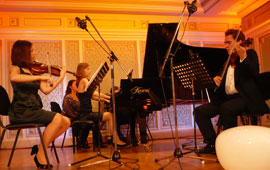 Opening of the Tuesday Night Season

Wednesday, 6 October 2010 , ora 9.06
The Small Hall of the Romanian Athenaeum hosted on Tuesday, October 5th, 2010, the Opening of the Season which was dedicated to the young talented artists. Thus, at the first concert of the Tuesday Night Season, we had the opportunity to listen to a chamber concert, that gathered the young musicians Mihai Cocea - viola, Ksenija Aleksandra Vukadinovic – piano and Raluca Stratulat - violin. The programme included the Sonata for viola and piano by Nikolai Roslavets, Dumka for Violin, Viola and Piano by Rebecca Clarke, There Is a Willow Grows Aslant a Brook by Frank Bridge, Concert Piece by George Enescu, Two by Victor Nicoara and Phantasy in F major for Viola and Piano by York Bowen.

Finalist of the "Eurovision Young Musicians" - in 2008 and third prize winner at the ‘Watson Forbes’ International Viola Competition, violist, Mihai Cocea is Paul Silverthorne`s student at the Royal Academy of Music in London.

He was born in Bucharest in 1990 and graduated George Enescu Music High school in Dumitru Ene`s class. Mihai Cocea won numerous national and international awards, including the Grand Prize and Best Interpretation of a contemporary work at Icon Contemporary Arts in Breaza in 2005, and the Second prize at Delius Competition – London in 2008.

He also participated in international projects such as Summer Camp Young Violist in Wroclaw, Poland, Melting Potes Musik, Nimes, France, Sampling Bukarest, Vienna Austria, Intercultural Exchange, Beijing China, Sermoneta Pontino Festival, Italy, where he had the unique opportunity to play in the same orchestra with his mentor Bruno Giuranna and three of the most famous soloists in Europe: Mariana Sirbu, Rocco Filippini  and Franco Petrarchi with whom he performed a sextet by Mendelssohn. Another cultural project, that emphasized his development, was his taking part in Sonoro - International Chamber Music Festival, which offered him the chance to play in several concerts together with great musicians of the new generation such as Alexander Sitkovetski, Diana Ketler, Razvan Popovici, David Cohe. These concerts were broadcast by Radio Romania, and Romanian Television and also BBC 3 channel.

Mihai Cocea was himself violist of numerous orchestras, such as the Youth Orchestra of Wroclaw, Poland - 2005, CEY-Youth Orchestra - 2006-2007, EUYO - Youth Orchestra – 2008 and National Youth Orchestra - Conductor Cristian Mandeal - 2009. The quartet, whose member Mihai Cocea was, participated in various concerts, which were organized by Princess Margarita of Romania, and also in the City under the City programme initiated by Mask Theatre. As soloist, Michael played in his own recitals at the Şuţu Palace, Enescu Museum and the Romanian Athenaeum.

Mihai Cocea plays a Salomon France 1780 viola that was borrowed by the Royal Academy of Music in London.

Obviously, we have had the opportunity before to see and hear young performers who made a good impression in terms of technical and interpretative point of view. However, these three musicians, who performed on the stage of the Small Hall of the Romanian Athenaeum, on the evening of October 5th, left the impression that they ‘overflowed’ musicality - if we may say so. The precise interpretation and mature understanding of the musical discourse, succeeded in providing an exciting evening to the audience attending the performance.

Even if the selected programme was quite difficult, thunderous applause and shouts of "bravo" made the young instrumentalists demonstrate once again, that they still had strength and resources to offer an encore: The Tear by Modest Mussorgsky. Despite the unfavorable weather and the harsh autumn day, this new season’s opening night was a very warm welcome.