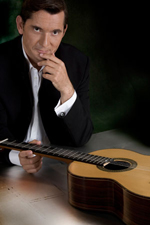 The recital entitled The New Spanish Music performed by the guitar player Jose María Gallardo del Rey and accompanied by the percussionist Roberto Vozmediano took place at the Romanian Athenaeum on Wednesday February 9th. The performance is part of the second edition of The Flamenco Festival that took place between February 4th-8th and was organised by The Cervantes Institute . Having been invited for the third time onto the stage of the Athenaeum, which he declared at the beginning of the evening as one of his favourite, the guitarist had a programme full of his own compositions: The Lorca Suite, an homage to the Spanish poet Federico García Lorca, The Trees Speak, Zapatero a la Barroca, Canción y Danza, a work dedicated to the memory of his teacher América Martínez, Fuego and Rosales. Del Rey is inspired in his works by the flamenco genre belonging to the Spanish country music but also by the classical music. The result is a very personal style, a music that speaks on itself, that is full of passion and sensibility, that means straight to the heart.

Jose María Gallardo del Rey isn't just a guitar vituoso but also a complex performer that managed to surprise us through the rich tones of the instrument, through the impeccable phrasing and an extremely refined dynamic and agogic pallet and also through his expresivity that transforms the themes into story characters. The tempo variations and sound intensity imagined by Jose María Gallardo del Rey were felt with great precision by the percussionist Roberto Vozmediano, a great connaiseur of the Spanish music's rhytms.

The presence of the Spanish guitarist at The Romanian Athenaeum was undoubtedly a great success and we are glad to listen to Jose María Gallardo del Rey again at The Radio Hall in a recital entitled Iberia.

José Maria Gallardo del Rey or a "conquistador" in Bucharest

"Iberia" is the title of the recital held on Thursday, February10th, 2011, at the Radio Hall by guitarist José Maria Gallardo del Rey within the Flamenco Festival. It was the second night we had the opportunity to audition the Spanish musician, who, a day before, had cast his "conquista" over the Bucharest audience at the Romanian Athenaeum in a recital in which he interpreted his own compositions. Last night, his victory was total as the public showed its appreciation through lengthy applauses to which the artist answered with two encores. This time I felt the need to begin with the ending because only this way could I give you an exact idea of what happened last night.

The programme featured works by Sanz, Murcia, de Falla, Albeniz, Ponce and Piazzola in whose interpretation the guitarist manifested a matchless artistry. In the Toccata in the style of Corelli de Santiago de Murcia, the guitarist offered an astonishing sample of his impeccable technique, managing to accurately master the sonority of the instrument. The same technique, combined with a great sensitivity followed José Maria Gallardo del Rey's discourse throughout the entire recital. Thus, there was created the Iberian atmosphere in which the artist, the public and the music merged. The visual effects obviously had their role as the red-light-turned-blue of the projector stimulated our imagination and encouraged our "Iberian escapade".

Indeed, I must join my colleague, Andreea Chiselev, present at the recital sustained at the Athenaeum by José Maria Gallardo del Rey, who appreciated in her review the "timbral opulence" which the guitarist exploited and which, here and there, gave me the feeling that there was more than one guitarist on stage.

It was an excellent evening, dare I note, and instead of an ending I invite you to read an exclusive interview given by José Maria Gallardo del Rey to Radio Romania Music.

Mr. Gallardo, sometimes people find it difficult to understand and assimilate a musical genre that does not belong to their culture. How can you explain the fact that flamenco is loved and universally understood even by non-Spanish people?

Flamenco means passion because it comes from the depth of the human being.

What exactly do you need to be able to perform flamenco? Do you need something special or can anyone perform this musical genre?

I do not believe you need something in particular. I see that every day more and more people turn to flamenco. You cannot imagine how well they perform flamenco in Japan. Of course, it is not the same as the music interpreted in Spain, but little by little, this genre is "exploding", spreading all over the world.

What exactly determined you to turn to this genre?

I come from Seville, Andalusia, so all my life has been accompanied by this genre. I have a scholastic up-bringing, I have finished my studies as the Conservatory where I studied classical music, but at the same time I was in love with flamenco. However, you need a solid technique to perform flamenco.

Is this your first time in Romania? What do you think about the audience here?

No, actually it is my fourth time here and I love the Romanian audience; you are a very cultured audience and I believe you took what is best from the two worlds which you are between: you have a Central-European tradition combined with the Latin soul. It is a unique combination and I feel very close to you.

What do you think about the Flamenco Festival held here, in Bucharest?

It is extraordinary because it connects flamenco with new genres. I strongly believe that year after year, the Romanians will come to appreciate flamenco and this festival even more.