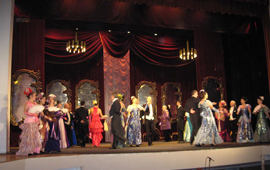 Having the desire to find various formulas so that the audience of all ages should enter the performance hall, The Musical Theatre "Nae Leonard" from Galati, offered an invitation, for Valentine's Day, to a new premier - Vienna Blood by Johann Strauss - operetta chosen particularly for that date of February 14th, comprising all the ingredients of a chain armour, developed and solved with great charm, and, of course in the waltz rhythm. Following this particular idea of good mood, of omnipresent humour, and of perpetually agreeable atmosphere, Cristina Cotescu, the director of the show, delineated the relationships between characters and the entire situation on the coordinates demanded by the changing feelings, by love which especially represents a well-being, shallow in depth, but always full of elegance and verve, so that everything flaws easily, fluently, logically- as much as the heap of trouble and combinations of the libretto allow it ( Romanian version of it was signed by Vasile Timuş and Miltiade Păun) - so much that even the lovers' arguments keep the amusing smile of a continuous flirt.

An achievement in itself is represented by the capacity to cast only the theatre's artists, with beautiful and pleasant young women, performing quite naturally, having appropriate voices too, some of them of even rare quality, together with parteners who corresponded to the created prototypes, the clear diction being rather the "appanage" of the former ones.

Inside the simple and suggestive sets, imagining the inside of a Viennesse house, the ambience of a sumptuous palace or the intimacy of the booths at Hietzing (even though the wheel and the merry-go-round suggest a miniature Prater) and the fin du siecle costumes, the flamboyant dresses which have a cut that favors the performers, and, in general, the elegant chromatic (scenography by Gheorghe Andreescu), the ballet dancers perform gracefully enough (choreography imagined by Fănică Lupu) the choire perform rather detached and seem to waltz, singing with real pleasure (Eugen Dan Drăgoi being the choir master), similar to the soloists who waste means of conquering the partners and the public alike.

Because the very serious "play" and the visible joy which were invested in interpreting the score, immediately attracted the audience who were invading the show room, generating enthusiastic applause and spontaneous reactions to each line or "tangled" situation, the effect was therefore, a permanent participation of the audience, who was thrilled to discover a work full of inspiration, in a setting to everyone's taste. And the fact that not even a joke was missed, plainly demonstrates the success of the artistic performance.

Each of the artists deserves a deep observation. The Soprano Ana Maria Samson-Crihana has a pleasant appearance, has guts, a nice voice, things that sometimes are not enough for being noticed on the "platform" while a more articulate diction is needed in Gabrielle's areas. Another soprano - Madalina Diaconescu - was an equally cheerful and pleasant Franzi, having a more penetrating voice, used with great certainty, and performing adequately to the character, the same as Adina Lazar from Pepi, thin, spoiled and whimsical. At the same time, Isabela Oancea intelligently performed "mother" Rosa's composition, arousing great laughter, together with Mitica Belciugan, brilliantly chosen for the part of Kagler, hilarious without being ostentatious, capable to outline the humour of the spoken text.

Alexandru Dobre sketches a military Vercingetorix who is slighly "insane", and Anton Mihail, in spite of being far from the traditional image of the character, was a persuasiv Joseph. In the higly demanding part of Eduard, the tenor Adrian Ionescu demonstrated that he could be a self-assured singer, his performance having the tinge of the eternal lover, superficially-agreeable, feeling at ease in the operetta genre. Besides him, Lucian Vlad Tatu did quite well the intervention of the Carman (also appearing as Butler or Waiter), Roxana Dobre, Mirela Stoica and Lenuţa Bercaru completing a homogenous team, balanced under all aspects, efficiently cooperating with the orchestra, who played neatly and expressively. The Conductor Sorin Oancea managed to coordinate the entire assemble with precision, surpassing with discretion the light differences.

Such an enthusiastic atmosphere ( the preview also gathered an avalanche of audience, fact which determined the supplementary number of chairs, and there were also some spectators who watched the show standing) had to be fulfilled by "de foyer" surprises, so that, on planning the first performance exactly on Valentine's Day, the manager Florentin Melinte, prepared a special tombola.

The winning tickets were drawn by an "angel", the prizes being a romantic dinner at a luxurious restaurant, a gold pedant (in the shape of a heart, of course) and two tickets to Fuego's upcoming concert, also organized by the Musical Theatre.

And all these were additional to the explosions of confetti in the end and an attractive show printed programme, conceived by the musical secretary Laura Sava, a sign that, in spite of all the difficulties in (re)organizating the event, financial incertitudes or...other things, the management and the artists are being "obstinate" in offering new shows meant to persuade the young Gălăteni that music is beautiful, that a show can be the ideal gift for an ideal evening.

Besides, the attempt to shape "tomorrow's public" is also reflected in music education programmes addressed to children, initiative worthy of all praise as much as the effort to properly honour the 55 years of existence celebrated by the Musical Theatre of Galati this year.