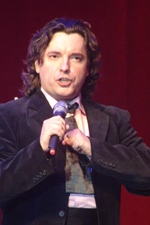 Produced and directed years ago by Cristian Mihailescu and scenographer Viorica Petrovici, the Verdian masterpiece Otello was produced again at the National Opera and Ballet Theatre in Constanta. This time the assistant director is Lucia Cicoara-Dragan who once performed Emilia in the Bucharest Opera production; her "inside" work with the famous master Jean Rânzescu representing an experience that she tried to exploit, but in a different way this time, wanting to accelerate the movement on stage. Even though I noticed a few stereotypes and attitudes, gestures or inconsistencies in the relationships among artists, the big picture was successful, the unique scenery and beautiful costumes suggestive, elegant and colourful and the action flowed quite naturally, which was essential for the public who might try to discover the story of the Moor for the first time.

While the conductor Gheorghe Stanciu returned to the music rack aproaching the complex score the same way he did at the  premiere on May 11th, 1996, the cast - exempting the bass Constantin Acsinte (this time in the role of Lodovico) - was different, but the same as in 1996 with guest soloists interpreting the characters Othello and Iago. The evening had a higher rate of interest due to the beloved Alfredo Pascu (from the National Operetta Theatre) who interpreted the title role for the first time - an irresistible temptation for any tenor who, moving from works for lyric tenor voices, turns gradually to the dramatic roles that require a spinto quality.

Alfredo Pascu, in the title role

After he appeared in Cavalleria Rusticana and Pagliacci (recently appearing in both works the very same evening, performance that few soloists have ventured to reach through time), he "tackled" the infernal role of Otello, extremely demanding due to both its difficult musical composition and the almost permanent presence of the character on stage. His entrance in the first act and then the duet with Desdemona convinced the audience - that filled the theatre room to the brim - that Alfredo Pascu (photo) had both an adequate voice, and the safety and the imposing presense required of a hero of this rank, provoking rounds of fully deserved applause. Unfortunately, a virus that "had threatened" during the rehearsals, as well (and because the draught on stage is terrible and the wind blows stronger in Constanta than in other places) made its 'presence' felt in Act II, affecting his acute, though the average register kept its generosity, his beautiful timbre being brought out many times during the performance. His ability to solve the issues caused exactly by the fact that the voice was no longer "answering" throughout the ambitus, led, in last act, to a clever solution; so that surpassing the stress of such a nuisance, he was applauded for a long time by the spectators who, as a sign of respect for his effort (psychical, as well) and power to outline an honest Otello in the end, rose to their feet.

Another guest - baritone Stefan Ignat (from The National Opera) - embodied the role of Iago in his already well-known manner of singing, incisive, harsh, with the obvious desire to show off a "black" voice. Surprising, however, was the use of (always the same) - the humble - insinuating attitude in his dialogue with any of the characters, far from the diabolical pride (in the area and around the plot that he weaves from the first moment) and even his status as a soldier that actually gives the hero exactly these arrogant and aggressive traits.

The soprano Elena Rotari, bringing the experience of various roles performed on that stage, it was a Desdemona more voluntarious than the diaphanous image drafted by tradition. I might have hoped more refinement and a richer colour palette in her fairly uniform voice approach during the first three acts, but Ave Maria and the Willow Aria at the end, rewarded all these expectationsthat seemed in vain, proving the singer's potential, namely the possibility to extend that sensitivity over the entire Elena Rotari's interpretative approach, removing perhaps that quasi-permanent feeling of "folded voice".

I was happy to listen to young tenor Doru Iftene again, a well-supported Cassio especially in terms of singing and I appreciated the way in which Emilia Lucia Mihalache evolved, the entire cast trying to raise the level of the production as we had expected. The choir, though much reduced (there were only four tenors left! ...), therefore so hard to homogenize (Adrian Stanache, choir master) covered correctly the sequences characterized by a beauty that could only be emphasized with a much stronger involvement and participation than that night's apathy, something that was also noted during the dancing sequences (choreographed by Rodica Raicu-Uretu) which were fairly desynchronized and "job-like", while the orchestra often sounded unexpectedly well, with accuracy and aplomb, under the baton of a conductor who, in addition to experience, has both the rigour and nerve of a person knows what to "demand" from the ensemble.

Why Iago kills Emilia in the director's vision, and he is slain by Othello, increasing the number of "the dead" over the thought of Shakespeare and Verdi as such, I understood neither at the premiere, nor even now, but it is important that the Lyric Theatre in Constanta has included again a reference creation of this genre in its repertoire which will certainly fill the theatre halls, because the show is delightful and Verdi's music has always been endeared by the music lovers of all ages.