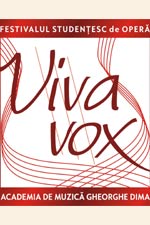 ... is already an important brand in Romania and in this part of Europe. This collocation arose in 2009 through the spirit of the first International Students' Opera Festival in Cluj-Napoca, at the initiative of the "Gheorghe Dima" Music Academy. It was followed by the 2010 amplified edition and the third edition, which will take place in 2012, is already being prepared.

Through the "Viva Vox" Festival, Cluj has became and it will continue to be the integrating and pulsating centre of the opera student life, at least in Romania and Hungary. Each edition, Universities and Academies of Music in Cluj, Bucharest, Iaşi, Timişoara, Oradea, Constanţa, Budapest, Szeged and Debrecen sent about 400 students each year to offer performances to the public and to their colleagues during the ten days of festival. A huge organizational effort is due to the active management, through the Univ. Prof. Dr. Francisc Fuchs - director of the festival - and his collaborators, Ina Hudea and Mircea Rus. Being unique in Romania, in this part of Europe and not only, "Viva Vox" announces to be an anticipated success also in 2012, by continuing the tradition.

On the evening of Thursday, April21st, 2011, an event which was a preview to the festival that took place at the Hungarian Opera in Cluj. The "Viva Vox" Opera Gala brought together a few young artists with a special talent, exponents of the excellent canto school in Cluj. Those who a few years ago were the promising students have now become trained singers, ready to appear on the national and international arena. I refer to Cristian Mogoşan (a day ago, the excellent Ismaele in "Nabucco" in Bucharest), to the baritone Florin Estefan, to the soprano Luiza Fatyol and to the mezzosoprano Iulia Merca.

But I do not refer only to those voices that I knew and I appreciated. The great and enjoyable surprises were the soprano Nicoleta Maier and the tenor Stefan Korch who is only 21, maybe a future... Ştefan Pop. I put on the list of my preferences the bass Alin Anca as well as the baritone Lucian Petrean. Across the board, they were voices with special tonalities, solid education, well mastered styles, repertoires appropriate to their ages, seriousness on their way to maturity.

Within the soiree, Bianca Manoleanu, the well-known soprano from Bucharest, also entered the contest with a beautiful interpretation of the concert area "Ah, perfido!" by Beethoven. The gala evolved under the batons of the masters Petre Sbârcea and Cristian Sandu.

In the opening, we saw the "Peer Gynt" Suite by Grieg, in the processing for brass winds due to Ion Dobrinescu. The "Spirit Brass Ensemble" Band performed, directed by Mihai Ceaşcăi. A transcription which keeps the spirit of the work and integrates admirably within the voices of the reciter and of the soprano but also puts the ensemble through the hoop. Almost entirely, he sang carefully. One of the remarks goes to the actor Hatházi András, perceptibly implicated from a dramatic point of view, even if the utterances in Henryk Ibsen that were made in Hungarian remained unknown to a considerable part of the audience as no subtitles were being used. Another remark goes to the same Bianca Manoleanu, with instrumental sound in the "Solveig's Song". Tonight, "Peer Gynt" in Ioan Dobrinescu's arrangement will be presented at the Radio Hall, and the actor Mihai Dinvale will join the soprano Bianca Manoleanu.

The concert in Cluj that evolved under the aegis of the "Viva Vox" Festival was a successful preview that kept alive the spirit of the previous editions. Having also a stated marketing aim, I am sure that the Gala will attract a considerable number of sponsors and supporters, interested in promoting this manifestation with an unique European character.