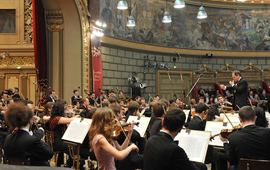 Magic Winter at the Romanian Athenaeum

The special programme organized by Lanto Communication, which featured the Romanian Youth Orchestra conducted by Cristian Mandeal, had an excellent credit on Saturday night (15th December, 2012). Magic Winter - and a fairy tale charm - enveloped the hall of the Romanian Athenaeum when Bogdan Băcanu and his young colleagues of The Wave Quartet played the version for four marimbas of the Concerto in C major, BWV1064, written by Johann Sebastian Bach for two harpsichords. It was more than an auditory experience, it was a full-on aural and visual show. Next was Emmanuel Sejourné's concert in Bogdan Băcanu's view, followed by an encore of the marimba band, which sounded a bit exotic, picturesque and glamorous.

The second half of the night reminded us of the joy of a musical and social event, characteristic of the winter holidays; widely available pages, with an orchestra that was incredibly spectacular and the ensemble was much challenged. We could believe that conductor Cristian Mandeal wanted each such miniature to offer a real lesson of interpretive art to the young members of his orchestra, who have shown exuberance and youthful enthusiasm, often translated into commendable energy - an excellent quality of sound when they played pages by Rogalsky and Strauss, perhaps a sound that was more desired in Ravel's Bolero or in Edvard Grieg's pages. It was an impeccable night, a night of wintry magic at the Romanian Athenaeum.