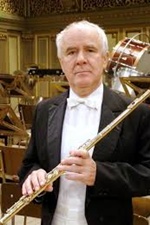 Wednesday, 9 April 2014 , ora 11.07
There was a special recital within the chamber season of the Bucharest Philharmonic. It starred Nicolae Maxim, the consummate flute soloist, alongside different generations of instrumental performers. The common denominator was their activity within the philharmonic orchestra, into which the protagonist was hired, in 1961, immediately after having graduated from the Conservatory. The flute player was astonishing with his graceful phrasing, clarity of sound and rich intricacy, but also through his vitality and involvement in the act of performing - one that would never betray his age. His performance was a confident and visibly voluptuous one and it relied on works of various ages, starting off with trios by Haydn and Loeillet before moving on to Telemann's trio sonata. Throughout the latter he was accompanied, as before, by the good oboist Felicia Greciuc, the highly regarded yet dull and rhythmically insecure bassoon player Laurenţiu Darie, as well as the harpist Miruna Vidican. The score was performed relatively flat, its imbalances and heterogeneity a constant feature. Following this were riffs taken and adapted from Berlioz's oratorio, Childhood of Christ. I expected the flute-oboe-harp approach to induce a difference in style. Nevertheless, the monochromatic flow remained within the same pattern as that of the previous works, despite honest and well-meant the performance. Nicolae Maxim, however, also proved a partiality towards modern music, having included Violeta Dinescu's musical piece, Hore de flori, with lyrics by Magda Isanos, in the programme. The work, performed in Bucharest for the first time, benefited from the voice of Anna Mirescu, soprano, herself a soloist able to maintain and handle the most difficult of scores with both ease and rigour. This musical piece could be regarded as a testament to her skills, a trial that she passed with flying colours, seeing how it switched back and forth among the quasi-parlato technique, the uttering of mere fragments of lines and the interval gaps, not to mention the intricate weaving the author often resorted to (although, the flute itself did have a more consistent and easily approached musical line). Clear, well-handled voicing was also showcased in Doru Popovici's lied, Sus, a miniature score, finely engraved with the discrete tones of the harp. Deciding to continue with 20th century music, Nicolae Maxim, Felicia Greciuc and Laurenţiu Darie played B. Hummel's Trio Op. 60, performed for the first time in our country. The score was planned in chirps, quavers and short, intercrossing interventions, proving both a certain percussiveness and synchronization, as well as a particular tone, aspects that I should have liked to observe during the first part of the programme, as well.

From the casual presentation that musical critique Petre Codreanu provided us with, we learned, amongst other things that Nicolae Maxim has been performing on the stage of the Athenaeum for 53 years, as a member of an orchestra, as a soloist or in various chamber arrangements. It is, thus, strange, to say the least, that the playbill (ever generous in its details concerning young performers in the small auditorium) could not find room for even a picture of the flute player, let alone a short history of his long list of performances that have stretched for the better part of half a century…at the Philharmonic, mind you!