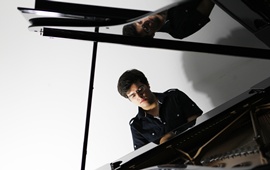 Wednesday, 16 April 2014 , ora 10.37
″A special musical evening, in which the sound is the protagonist and the audience′ s emotions become the stage itself″- this is how the pianist Florian Mitrea greeted the public during the short introduction that he offered to the music lovers who were attending another recital of the Tuesday Evening Season. It was a numberless and enthusiastic public, who waited eagerly and full of interest for the recital of a pianist already established in the musical field and possessing an impressive record: Florian Mitrea is the 2010 winner of the Panmusica Austria - Vienna International Piano Competition; he also performed abroad, in recitals which many musicians desire. Florin Mitrea has already performed in programmes at the Eroica Saal, in Vienna, and in London, at the St. Martin-in-the-Fields Church, the St. James' Church, and the Steinway Hall and at the Drapers' Hall.

The concert performed at the Romanian Athenaeum, will be followed by another two concerts - at St. Anne's Kew, in London on 4th May and at the Kings Place on 28th June, respectively. These represent an important visiting card for a 25 years old pianist and MA student of the Royal Academy of Music in London; Florian Mitrea proved his talent, his virtuosity, the experience he gathered and, last but not least, his ability to successfully carry out an extremely difficult programme, about which he stated:

″Liszt is the composer thanks to whom I am playing the piano today; there has been a time when I wished the piano was part of the orchestra, because I liked the symphonic repertoire, but what Liszt did for the piano encouraged my wish to learn this sonata which actually was my first performance in front of a public...I was very happy that I managed to perform it...On the other hand, Prokofiev is one of my favourite 20th century composers. I combined Schubert and Prokofiev thinking that I had two sonatas in A minor or major, but with two different ideological worlds and then there is Liszt, playing with the colour of the sounds, and where else can we see the colour if not in Debussy's compositions? Therefore, my choice was somehow easy... I think every composer tried to express an emotional abundance of ideas. When it comes of Prokofiev, I think mostly of his ideas; he fought against the system and he never conformed to the rules; for example, I tried to perform the second part of the sonata as a ballet music, but there are people who consider it a sarcastic scherzo and this type of irony in music was no longer accepted by the regime. Look how many elements are hidden inside the music; this is why I love this sonata very much, it is full of essence, ideas and the ending fascinates me, because you can actually feel the war knocking on the door and this conflagration bursting and destroying 20th century humanity...I had never performed at home before and the pressure was enormous; there were two of my teachers in the hall, together with my friends and my family; and of course, it was the Athenaeum, which I have always regarded with humbleness, since I was a child."

A warm and harmonious touch, driven by a good technique - this is what I noticed in the performance of the young musician Florian Mitrea, in a programme where he operated the colours of the sounds, with the ability of a painter. The public, who filled up the Small Hall of the Romanian Athenaeum, on 15th April, certainly quivered, discovering the sounds turned into colours, in Debussy′ s overtures, the multitude of feelings in the Sonata in B minor by Liszt, the vocality full of expressivity in the Sonata in A minor by Schubert and the tumult of the emotional tensions in the Sonata no.6 in A major by Prokofiev. The recital performed by Florian Mitrea attracted the ovations of the music lovers, who applauded for a long time, calling him back on stage.