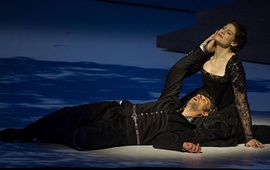 Don Carlo by Verdi on the stage of the Grosses Festspielhaus (the Large Festival Hall), in the Salzburg Festival, a performance of the year 2013. There are few occasions when you can see the Italian maestro's masterpiece in its entirety, consisting of five acts (the French version of 1867), and even fewer are the occasions when the cast of the performance includes only first-rate artists of the contemporary lyrical stage. The organizers chose wisely the ideal interpreters. I confess I had some doubts when I saw that the role Philip II was to be interpreted by the Finnish bass Matti Salminen, a legendary artist aged 68. However, I witnessed an incredible vocal and interpretative demonstration. The experience accumulated over decades of artistic activity on the greatest stages of the world, the wisdom of age, his knowledge of the art of singing, the credibility of his stage presence - all of these more than offset the small vocal imperfections. The great aria and the scene of the meeting with the Great Inquisitor (the American Eric Halfvarson) were incredibly moving.

The title part was held by the German tenor who nowadays attracts everybody's eye and appreciation - Jonas Kaufmann. I have recently seen him in roles, such as, Lohengrin, Faust and Werther and I have realized that romantic roles fit him perfectly. When interpreting them, the actor-singer burns with an impressive passion. He really lives, feels, understands and assumes the character. And the voice - pure gold!

It is difficult to be Jonas Kaufmann's partner on stage, but the German soprano Anja Harteros was a wonderful Elisabeth. She has the image of a Madonna, a flexible and colourful voice, perfectly mastered with science and intelligence, impeccably led from the technical point of view and, happy coincidence, perfectly harmonized with the tenor's voice. All the moments when Carlo and Elisabeth communicate, from their first meeting at the castle in the forest of Fontainbleau to the last scene near the tomb of Charles V, were magical.

The performances of the Russian mezzo-soprano Ekaterina Semenchuk (from the Mariinsky Opera in Sankt Petersburg) as Princess Eboli and of Thomas Hampson, the American baritone, as the Marquis of Posa were very good. But, when three of the interpreters are excellent when it comes to refinement, vocal and scenic intelligence, the small differences between "fantastic" and "very good" become visible.

The entire performance bears the influence of maestro Antonio Pappano, conductor and pianist, music director of the Royal Opera House Covent Garden in London since 2002. Antonio Pappano loves Giuseppe Verdi's music; he understands it and his interpretation is profound and expressive.

We have been won over by the art of the maestro in Verdi's Requiem that he interpreted in 2013 at the Palace Hall in Bucharest, within the 'George Enescu' International Festival, together with the Orchestra and the Choir of the National Academy of St. Cecilia in Rome (the mezzo-soprano Ekaterina Semenchuk was part of the quartet of soloists!) From the first sounds in the score of Don Carlo, we appreciated the amplitude and suppleness of Verdi's musical phrasing, that Pappano builds with gigantic keystones, filling each sound with colour and expressivity and granting interior voices the attention they deserve. We found again the same construction and musical flexibility in the singing of the three protagonists - Carlo, Elisabeth and Philip, which gave unity and splendour to the whole. The ensemble of the Vienna Philharmonic and the Vienna State Opera Chorus (choir master Jörn Hinnerk Andresen) responded promptly and efficiently to all of the maestro's requests. The score is by no means easy, as Verdi built the story in Don Carlo using extreme situations, confrontational ones. In Antonio Pappano's version, music has an interior tension, both in the more delicate scenes and in the very dramatic ones.

Certain suggestions for direction might be present in the five acts that take place in generous spaces: a frozen forest, a monastery, the garden of a Spanish royal palace, a big scene where the heretics are burnt to the stake, a prison…However, the direction and scenography created by Peter Stein and Ferdinanda Wögerbauer involved austere, essential images, with a halo of charm and mystery, where the opulence is suggested through an element of the décor - for example, a big fountain in the palace gardens. The idea of dividing the stage for the two tableaux (the king's study and the prison) is extremely interesting and…practical! King Philip got the right half of the stage, whereas the left was occupied by the prison where Posa was to die. The effect created by a stage only half visible, half lit is quite special.

The note of elegance and the suggestion of the Spanish Empire, a great world power, are emphasized by the rich and elegant costumes. Even if the black is dominant, at the moment of festivities, the king and queen are dressed in splendid and precious golden costumes (created by Annamaria Heinreich).

Don Carlo by Verdi on the stage at Grosses Festspielhaus (the Large Festival Hall), within the Salzburg Festival, the 2013 edition, will remain unforgettable for me and for the other approximately 15 spectators in the hall at Grand Cinema & More at the Baneasa Mall. The indifference that an audience used for decades to lyrical theatre shows towards these filmed performances or live broadcasts is incredible! Incredible when it comes to music experts, and especially artists - students, graduates, artists at the beginning of their careers or already-established artists who still have something to learn! Incredible, yet true. Such a pity!
Cristina Sârbu
Translated by Mihaela Olinescu and Elena Daniela Radu
MTTLC, The University of Bucharest
Return to archived Chronicles