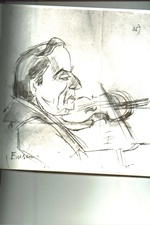 As we do every year on 5th May, we pay homage to George Enescu, the maestro whose passing on that sad day in 1955 is now commemorated at the Museum named after him, with a special evening of chamber music, in collaboration with the Composers Union; the programme features Enescu's early works, with no opus number, some of them unpublished, in a beautiful interpretation.

The programme, entitled "George Enescu, the Eternal Contemporary" was prefaced by Cristina Andrei, Director of the Museum, and detailed by cellist Marin Cazacu, who also performed the Nocturne and the Saltarello, accompanied by pianist Verona Maier, with a particular elegance and warmth - these were Enescu's compositional debut, at the Paris Conservatory, when he was only 15. The score was rediscovered by Marin Cazacu himself in the USA and thus it entered the recital circuit. Then, the Torso Sonata followed, which is a version of the first part of the Sonata No 1 for Piano and Cello, found recently; clear differences from the well-known opus could be noticed. Ştefan Cazacu played beautifully, along with Verona Maier, stressing out his generous sound, his fine phrasing and the mature grasp of the lyrical-nostalgic content of Enescu's cantilena.

Moreover, violinist Gabriel Croitoru emphasized the fact that for the first time we would be listening, on the Guarneri violin that belonged to Enescu, to the Ballad and the Impromptu Concertant - pieces which Enescu himself performed with sensitivity and knowledge of full line; that the instrument (which he competed for) conferred even more vibrato through its special sound. As he is the first performer to play this violin, which had been kept (solely) in the Museum's collection for decades, we had the opportunity to hear him interpreting the two pieces on the famous Guarneri, again accompanied by Verona Maier on the piano; she came back on stage later with Marin and Ştefan Cazacu for the Andante Religioso, written in 1900, but edited by the Museum only last year, when the same devoted Marin Cazacu gave it back to the public, pointing out young Enescu's evocative and pensive side; the excellent relationship between him and his son was also remarkable, in a well-balanced dialogue, where sound and perfect technique, as well as expressiveness, were very...familial. Verona Maier once again proved to be a refined pianist, with a round touch and great ability to collaborate with the stage partners; this was also seen in the Serenade Lointaine composed for violin, cello and piano and dedicated to King Carol I and Queen Elisabeth of Wied - musicians Gabriel Croitoru, Marin Cazacu and Verona Maier created a calm atmosphere of reverie and poetry "from faraway", taking over and winning over the public, who applauded with excitement this truly artistic step meant as a homage to Enescu on that very special day.

While here the bust of the Maestro governed the entire ambience, Enescu's presence was extended to the next room, too, through a special exhibition offering the audience, for the first time, pages from the "Book of Honour" of the Public Instruction Ministry Orchestra, 'the first symphonic state ensemble in Romania'; the document, which has been recently purchased by the Museum in an auction, shows the ensemble's artistic performances from their very debut, when conducted by Enescu or other great worldwide artists whose signatures, together with complimentary comments, playbills and photos (from the Museum's or Viorel Cosma's collection) is an amazing reflection of the musical activity in Bucharest at the beginning of the 20th century. Artists such as Mascagni, Weingartner, Ysaye, Kubelik, Rubinstein, Flesch, Jora, Nonna-Otescu, Alessandrescu, Cella Delavrancea, Aurelia Cionca and, of course, Enescu, as well as other soloists or conductors who were already famous or only at the beginning of their careers at the time, can be found in this exceptional document; the exhibition, set up by Adina Sibianu, coordinated by Viorel Cosma, with graphics by Aurelian Popovici, contains printouts that reproduce only a few pages from the "Book of Honour" of the orchestra that later became the "George Enescu" Philarmonic. The "series" will continue with other amazing disclosures from a fascinating history that deserves to be known today. It is a shame that Viorel Cosma was the only musician in the audience, other artists or those who claim to be promoting Romanian art were remarkable...through their absence.