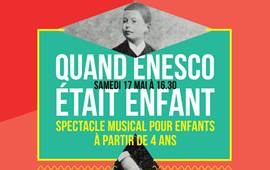 The performance "Enescu as a Child", put together by the Dalcroze Society of Romania with the support of the Romanian Cultural Institute took place at the institute Jaques-Dalcroze in Geneva on 17th May. It is an interactive performance with a documented presentation of George Enescu's childhood included and interlaced with moments of a violin recital interpreted by the violinist Bogdan Zvorișteanu: The Fiddler from the suite Childhood Impressions and the Third Violin Sonata performed in a Romanian pop style (piano: Katia Ivanova and Petru Voinescu). In the second part, the children were invited to a rhythmic workshop - body movements inspired by the Romanian Rhapsody no. 1 written by George Enescu, workshop run by Anne Claire-Ray Bellet, teacher at the Swiss institute which hosted this performance for children older than 4 years old.

Anne Claire-Ray Bellet, with an experience of over 20 years in Dalcroze musical education, describes the children's reaction at their meeting with Enescu's music:

What is interesting is the fact that while I was talking and listening, they had a completely different state of mind than during the moments when they were moving. When they took the scarves and started dancing on Enescu's music, I had the feeling that they were absorbed by the music, it reached to them. When they are only listening to it, they are much more distant. Even I, personally, when I accepted the proposal to do something with the Romanian Rhapsody, at first I thought: hmm, what could I do with it? But after I had listened to it with my body, I tried to discover its movements on my own; and I discovered a completely different author. I understood the lights, the sounds and the rhythm. It's a complex melody and the thing that amazes me the most today is that from the point of view of symphonic music I only knew Enescu as influenced by Brahms and the great orchestral currents, by Wagner. I think that violin music represents indeed the search for the origins, for the self. It has irregular rhythms, oriental scales, minors. What's certain is that the children took indeed this great opportunity of listening to a violinist of such magnitude because, after all, that's the main idea: children need to listen to quality music in order to be able to love it.

The violinist Bogdan Zvorișteanu, concert master for the Suisse Romande Orchestra in Geneva, talked about his relationship with George Enescu's music:

I remember studying with my father the Violin Sonata no. 1 by Enescu, sonata which I had never heard played in a concert. But it was an excellent head start for me and after a while I took to the Sonata no. 2 and exactly a few days before the Rebellion the competition for performing the Violin Sonata no. 3 in a Romanian pop style by George Enescu took place. It was held in Oradea at the time and that was when I truly understood the depths of this sonata and appreciated it immensely. I realized how much richness Enescu's composition was hiding, how vast the perceptivity of this man really was. What I'd still like to do is Childhood Impressions - I already know the first part,tThe Fiddler. Unfortunately, I have only tried symphonic music once before - when I performed the Suite No.1 by Enescu in Bucharest, with the Suisse Romande Orchestra during the 'George Enescu' International Festival and I am under the impression that it has not been really understood, neither by the conductor nor by my fellow musicians, because it is the kind of music you need to know a bit of history about in order to understand it, to know where it's coming from. There is so much childishness in his music, but childishness not in the naive sense; in the sense that he spent his childhood amazed by everything that surrounded him. In fact, his music reveals so much of the Romanian soul.