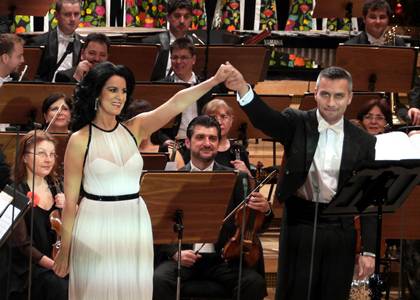 'Il est très bien, ce chef d'orchestre' - I wonder who he is?

Monday, 10 November 2014 , ora 9.59
Sunday, 9th November is when the programme à la roumaine at the Théâtre des Champs Elysées in Paris ended, with a concert that you certainly heard about on your favourite classical music radio station. Tiberiu Soare, from the stand of the German State Philharmonic of Rhineland-Palatinate, joined the soprano Angela Gheorghiu and the tenor Marius Vlad Budoiu on the stage of the famous Parisian theatre. Belonging to the 'Les Grandes Voix' ('The Great Voices') series, which has lately enjoyed the benefit of Cecilia Bartoli's presence ; and in the second part of the season there will be no other guest than Anna Netrebko ; yesterday's evening proved how literally adored is Angela Gheorghiu in Paris. She shone in a very offering programme which gathered tunes from Puccini's La Bohème, Charpentier's Louise, Verdi's Othello or Cilea's Adriana Lecouvreur; those were sprinkled with moments for the musical orchestra exclusively; so Tiberiu Soare had the chance to show to the audience that our conducting school, which gave a lot of the world's great names, maintains itself at impressive standards.

There were so many moments of intense excitement that I do not know which one to mention first... perhaps, the one in which Angela Gheorghiu sang Verdi's Ave Mariaor Ecco: respiro appennafrom Cilea's Adriana Lecouvreur ? It is hard to say where her special tone shone more intensely ; what is easy to say is that the experience of listening to her live is amazing and the parisian audience enjoyed her to the fullest. The Théâtre des Champs Elysées Hall was overcrowded and the rounds of applause after each of the soprano's arias shook the building. And even if the evening was supposed to end at 22:00, after two hours of music, the performance was prolonged by 30 minutes, in which Angela Gheorghiu performed several encores, always brought back on stage by the audience's ovations.

The delight of listening to one of the best sopranos in the world was equalled by that of being able to watch her next to the conductor Tiberiu Soare. That is because I have an endless admiration toward his talent and sensitivity and also his devotion for the score. 'The score is the instrument of a conductor' is what he confessed in one of the interviews, that I was happy to take . And yes, the extraordinary precision that could be felt in the orchestra's performance is not exclusively due to the fact that they were German musicians (let's not feed ourselves upon cultural clichés), but it was mostly due to the attention Tiberiu Soare paid at every single thing pointed out by the composer in the score. So, the arias were interpretated with an impecable phrasing and compact sound, which moulded versatilely on Angela's soloistic discourse. Moreover, Tiberiu Soare had four moments by himself, in which he could floor his musical BMW's pedal which was the German State Philharmonic of Rhineland-Palatinate. And the unleashed race ended every time with champaign and ovations. Next to me, there were two young ladies whose very competent remarks I couldn't help but overhear after each song, marked Tiberiu Soare's evolution with a "Il est très bien, ce chef d'orchestre"- "He's very good, this conductor". Truth be told, I could not hold back the thrill of pride that marked the ending of an extremely good evening.