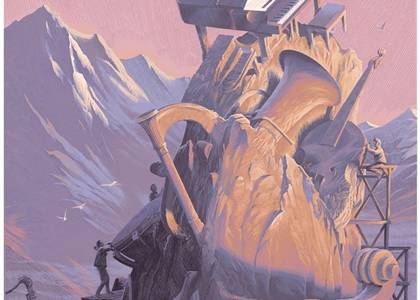 Monday, 24 November 2014 , ora 14.15
The Ars Musica International Contemporary Music Festival, for which composers, such as, Gÿorgi Ligeti, Pierre Boulez and Luciano Berio have composed music since 1989, took place this year in Brussels, between 14th and 30th November, 2014. After a first free evening event (19th November), which took place in the famous Gare du Midi, one of Belgium's train stations, where the MP4! Quartet, with the participation of the dancer Isabella Soupart, interpreted the Different Trains string quartet, by Steve Reich, we listened to the concert performed by the Liège Philharmonic Orchestra, conducted by Patrick Davin, which took place at the BOZAR (Palais des Beaux-Arts) on 20th November.

The first composition in the programme, which had violinist Tedi Papavrami as the guest soloist on stage, was the Serenade, after Plato's Symposium, by Leonard Bernstein. It may have not been the most inspired decision Tedi Papavrami took for his debut that evening, but Bernstein, without having been a soloist in the traditional sense of the word, did a compositional exercise, where the violin has a prominent role, in which three out of the five movements of this work were blurred by the final two. I would have compared some musical sequences to a solitary landscape, to the vast and arid American plains; the last movement of Bernstein's composition was transformed into coloured jazz and music-hall moments by the excellent percussionists, who played, among other instruments, the xylophone, glockenspiel, tambourine and triangle.

The Canyon, by Philip Glass was the work with and after which the Liège Philharmonic Orchestra warmed up. The harmonic changes, which are typical to Glass, reminded one of those composed by Beethoven: a classical, consonant, sensible chord, as if listening to a single one, and which provoked a complete amazement (and joy), when listening to each one tying sonorously after another and another and another, … - in Glass' case you do not hear too many and definitely not too various chords tying one after another; but, after all, it was a superposition of sounds, which could travel to any direction, not necessarily to a destination where the ear would want to go, but to those destinations where music would want to go by itself, without brutalizing the ear and where it could leave it in a comfortable sonorous position.

Minimal music, the aesthetic in which Philip Glass falls in, is based on the repetition of the same sonorous structure, and then of another one for a while; as we know from Mozart's work, the concepts of musical development, evolution and purpose do not exist, but are given by small changes of rhythm, not melody. Yet, the simpler the chords and their successions, the more repetitive they are, the more hypnotic and addictive they become.

The rhythm had the exact purpose in the Canyon - the purpose of making the music very pleasant to listen to; the soloist, with the help of a drummer, who was a constant presence during the entire performance, produced a music where the tension was built by the accumulation of pure temporal sonorities and by some sudden and charming as an explosion of light brass infusions.

The public was able to listen to the composition Zwerk (the Sky) - commissioned by the Ars Musica International Contemporary Music Festival and written by the Belgian composer Peter Vermeersch, performed for the very first time, in Brussels, on 20th November, 2014. Like a painting, which the artist starts to paint outward from the focal point, the composition started with low sounds made by the contrabasses and timpani. Then, the violins showed up, as the (apparently) accidental strokes of the painter's brush appeared on one of his works, then, the whole painting filled up with the harp, trombone, trumpet and clarinet chords, and then, towards the final, before almost completing his painting, another few violin-strokes appeared, just so, the whole composition could advert the listener's attention to certain cartographic areas. I acclaimed the composer Peter Vermeersch for that vision of the heavens of his.

The end of the evening belonged to another famous American, John Adams, who was also rooted to the Minimal movement; but the music of his composition, the Chairman Dances, had something which was closer to the soul that had a bigger need for natural warmth rather than a monotonous sonorous system which enticed (fiercely) only with its repetitions. Adams' composition was an infusion of music-hall and jazz tunes, of tunes characteristic to Fellini's-film-music-composer Nino Rota, and even memories from the New World Symphony, by Dvořák and rhythms specific to the (American) Creedence Clearwater Revival ensemble.

The Liège Philharmonic Orchestra, conducted by Patrick Davin deserved every clap of hands it received after the interpretation of each composition at BOZAR (Palais des Beaux-Arts), on 20th November, 2014.