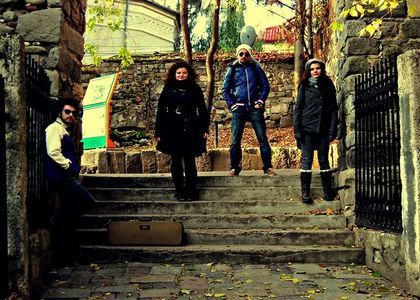 Wednesday, 14 January 2015 , ora 9.14
Having his star in the ascendant, the Solartis Quartet was a guest to the Tuesday Evening Season programme. The recital they held at the Little Hall of the Romanian Athenaeum on 12th January, was the second in a series of eight concerts, held under the Tones and Tempers heading/title at the Șuțu Palace, the National University of Music Bucharest and theMusic and Art Academy. Sabin Pelea, the first violinist of the quartet, explained why they chose Tones and Tempers as the name of their concert series:

We chose to name it Tones and Tempers, because, in a way, it marks our ambivalent nature: we chose classical music "tones", such as Haydn and Borodin, but we also tried to challenge our public with our "tempers" - and Mr. Zabel's work is more than a challenge. This is why we thought of a more modern side, during which we could try a different kind of repertoire, a repertoire the public didn't expect, such as the Beatles or Pink Floyd. Thus, we could attract the public to the concert hall, we could make them get used to the chamber concerts held in both official spaces, such as the Little Hall of the Romanian Athenaeum, and during special performances, which would take place in private houses, pubs... anywhere really... We are willing to go anywhere for our public... to take it by force.

Sabin Pelea - the first violin, Ana Maria Marian - the second violin, Laura Zecheru - viola and Andrei Nițescu - cello, these are the four members of the Solartis Quartet - Sun and Art, an ensemble which has won many national and international awards in their almost three years of professional activity, and their most recent winning is the second prize at the Plovdiv International Chamber Music Competition. We were able to listen to two quartets by Haydn and Borodin and a another work, named Danse Macabre, which was interpreted for the first time in front of a Romanian audience and composed by the German composer Frank Zabel in 2000, who was also present in the audience at the Little Hall of the Romanian Athenaeumyesterday evening and who said the following about his work:

This isn't the first work in music history with this name. To me,"Danse Macabre" is a representation of the life cycle: from birth to death. The six movements of the work represent the circle of life: we are born, we are children, then we become adults and, finally, death takes place, which I see as a dance macabre.

An adventurous programme, if we think of the contemporaneous work the Solartis Quartet wanted to interpret in order to regain the attention of the public, attention which they have lost while interpreting classical music for the past few years. I can definitely say that the public listened to the interpretation of the three works with high interest, a public among which pianist Verona Maier was:

The Solartis Quartet dared to put together a series of concerts during which they would cover the music history, as you witnessed this evening: Haydn - the father of quartet - was present, and Frank Zabel's work is a genuine prof that the music written for the string quartet yesterday came into the attention of the four musicians. It is a series of concerts which will try, mainly, to regain what happened during the time their greatest trump - their communication to the public. After all, the contemporary work they interpreted this evening turned them into its humble servants, because the power with which they preserved feelings, they managed to communicate with the public, who was composed entirely of fans of contemporary music, made the whole studio room of the Romanian Athenaeum quiet. Their power to communicate has always been a trump for the Solartis Quartet and they knew that is a coordinate they can count on and with which they can impress the public. The series of concerts they put together, it certainly aims at the polishing of the details which make a difference between the great career of the quartet and a very good evolution, even an exceptional one sometimes, as it was this evening's.