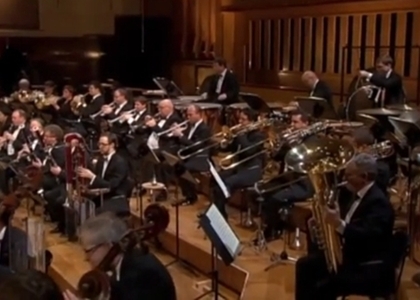 Monday, 19 January 2015 , ora 12.47
I listened to a concert performed by the Brussels Philharmonic Orchestra on Friday, 16th January 2014. It had been conducted by Michel Tabachnik, its current music manager in December - this time, it was under the baton of the conductor who will take over the position of music manager next season, Stéphane Denève.

The programme was, at least in terms of time period, a very modern one: contemporary music - and I found out that this kind of music will be included permanently in the repertorial policy of the French conductor - alongside a twentieth century work. The American composer Jennifer Higdon wrote Blue Cathedral, in her brother's memory, who was also nicknamed Blue. She created a serene atmosphere, specific to the one present during the church services, but, at the same time, a recognizable American one, especially when the sound of the flute and of the clarinet were sending calls over the plains, against the wind. Once the sonorous events were crowded, Jennifer Higdon introduced call-and-response moments in her performance (the speaker would enunciate a sentence and her interlocutor's reaction would appear, in the form of an answer or a commentary), those too were specific to music genres which arose in America - gospel, blues, rock'n'roll. In the beautiful music written in the memory of a brother, the peace its composer wants him to find and his sister's torment, which becomes aware of her loneliness, are present. Reminding you of a national school of music, which exploits the country's folkloric resources, not of the atonal music, Blue Cathedral also contains more actual musical effects - the score signed by Jennifer Higdon involves crystalline sounds, made by a prepared piano, musical water glasses and Baoding balls.

The evening continued with another contemporary work, it continued with the Concerto for Cello and Orchestra, by Guillaume Connesson, where the composer superposed the ensemble and the soloist in two ways. On one hand, it was as if the protagonist did not always go along with the orchestra: what the soloist plays is completely different from what the orchestra plays; yet, each score is equally rich and it is necessary for both of them to have knowledge of musical technique. On the other hand, the work is conducting a classical dialogue, which is similarly to the call/answer principle, by alternating the soloist's idea to their analysis, made by the orchestra. The exotic musical instruments present were kalimba or mbira or thumb piano, these are the three names of this percussion instrument, made of a small resonating wooden board, with attached staggered metal tines, which are plucked with the thumbs. This kalimba was present during the second movement of the Concerto for Cello and Orchestra, by Guillaume Connesson, which was very lyric, even though the language used was the same contemporary one, and which it shinned during a moment of great suaveness - the sound of the xylophone and flute could be heard over the sounds made by the soloist's instrument. After an extended cadence, the concerto went immediately to a third movement, which was very alert, voluble and full of virtuosity and drew appreciative exclamations from the public when it ended.

The soloist was Jerôme Pernoo, for whom Connesson wrote the work and which he interpreted on its first audition in 2008. Pernoo almost turned this concerto into his own creation with the incredible conviction and capacity to convince the public, with rapidity, accompanied by an extraordinary expressiveness - he received so many applauses that he interpreted once more the final movement of the concerto, assisted by the conductor and by those who had been his orchestra mates.

For the end of the concert, which took place at the Flagey Radio Hall, Stéphane Denève offered his personal selection of orchestral suits from the ballet Romeo and Juliet, by Serghei Prokofiev. Each sequence is a piece of music in itself, due to the emotion it conveys, to its development and its content, which needs to be conducted from the beginning to the end. It is remarkable for a conductor to able to do that so many times, while still maintaining the general ideational framework. The Brussels Philharmonic Orchestra rendered the contrasts very well - the ampleness or the smaller nuances, boldly or with easy pizzicati; musicians can change their moods, even from one minute (which can be the duration of a sequence in Prokofiev's music) to another. As it happened during the concert which took place in December, the sound of the orchestra was full, harmonious, but also light. It gave me the impression of a keyboard instrument, each timbre having a particular sound, perfectly simultaneous with the others. The conducting gestures Stéphane Denève made were extremely evocative: when the symphonic ensemble was translating them into music, one might have thought that the conductor was the composer who was creating his score at that very moment and not that he was, in fact, adjusting himself to each piece of music he was conducting.

I hope to be able to listen to the Brussels Philharmonic Orchestra again, on 16th February - with Michel Tabachnik standing at the conductor's desk and the violinist Valeri Sokolov, who is the winner of the George Enescu International Competition 2005 and will interpret the Violin Concerto in D, Op. 35, by Tchaikovsky; my waiting is tempered by the certainty of a new wonderful evening.