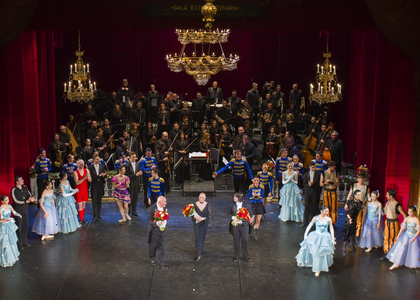 Tuesday, 20 January 2015 , ora 13.39
Wanting to prolong the charm of the traditional Viennese New Year's Day Concerts in a "slightly different" combination, the Opera of Iași suggested an extraordinary New Year Gala, with a distinct degree of novelty, as the reputed former ballerina Ileana Iliescu was asked to create the choreography, while on the podium of the theatre orchestra - set on the stage - stood either the maestro Petre Sbârcea, thus celebrating his approaching anniversary, without letting his 83 years show, or his former student, Gabriel Bebeşelea, who has been working for the host theatre for the past few years.

"Slightly different" was also the fact that the musical pieces accompanied by dance were interlaced with the purely orchestral ones, even if some of them were actually cut out from famous ballets, which would certainly have deserved to be illustrated too through choreography, in an original manner, especially as Ileana Iliescu herself had at some point danced in Tchaikovsky's Swan Lake or The Nutcracker, or in Gounod's Walpurgis Night from the opera Faust. We listened to the overture of the opera The Bat by Strauss, the Slavonic Dance No. 8 by Dvorak and an excerpt from Bizet's L'Arlésienne, alongside a few appreciated pieces from Johann Strauss's creation, accompanied of course by a charming choreography, with a few elements of technical performance, relying mostly on the elegant and graceful movements from The Imperial Waltz, Tales from the Vienna Woods or The Blue Danube, also introducing the spectacular, lovely and humorous composition by means of The Quick Polka, which brought about small tableaus that were often enchanting, involving either a station master, two young men and, obviously, a girl full of life, or a boxing coach and the ones eager to be his apprentices, picturesque and well-conceived characters, rendered with great talent, to the public's delight; and in the Champagne Polka two lovers, a slightly drunken waiter and the bottle with the 'indispensable' glasses appeared, an opportunity for a little play also applauded by the public. But in the extremely generousPolovtsian Dances from Borodin's Prince Igor opera there were also some sort of odalisques and warriors wearing stripped pants, performing in different combinations and choreographic formulas; finally, the Radetzky March brought cheerfulness through its elegant blue uniforms and the couple 'marching' step, performed with real pleasure.

The orchestra played neatly, although I was expecting for them to underline more emphatically the defining and ever so different traits included in the scores they chose, from the distinctive Spanish rhythms to the Slavic stomping dance, from the sentimental 'oriental' performances to the explosion of the 'battle' ones, from the fascinating world of the 'Walpurgis' to the Russian trepak; and I was maybe expecting a little more colour, brightness and magnitude, aspects also 'demanded' by the highly percussive composition. But what matters is that there was a special atmosphere, one of relaxation and good humour, beautiful music, flowy dresses and ingenious costumes used in vivacious miniatures, winning over the audience invading the hall, eager to relish such an event by means of which the manager Beatrice Rancea wanted to recreate that 'state of well-being' of a New Year Gala, but also bring back into the spotlight some reputed artists, such as the ballerina Ileana Iliescu (thrilled to enjoy the same success she had had with a similar performance, also presented at the Olympia Theatre in Paris) or the conductor Petre Sbârcea, who celebrated his birthday... on the podium, as he has probably always wanted. And so, the Gala had all the prerequisites and... ingredients of an extraordinary evening, when the confetti towers and the fireworks that the people of Iași highly appreciate (and anticipate) could not be absent.