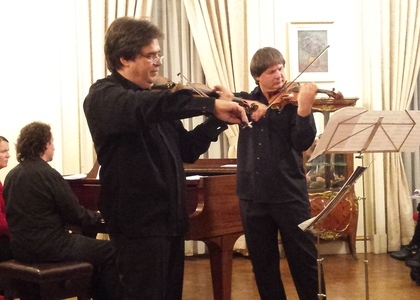 The Duel of the Violins in London

Friday, 23 January 2015 , ora 10.16
Last night, 22nd January, 2015, the protagonists of the The Duel of the Violins tour, Liviu Prunaru and Gabriel Croitoru performed in London the opening act of a programme dedicated to George Enescu. On the concert stage in London, the two violinists played in this formula for the first time. Liviu Prunaru played his Stradivarius violin and Gabriel Croitoru played the famous Guarnieri violin. The performance of the two Romanian musicians in London took place after the fourth edition of the successful The Duel of the Violins tour had ended in Romania. The event was organised by Radio Romania Cultural Media Centre and Accendo Cultural Association.

This is what the violinist Liviu Prunaru told us right after the concert:

'After having finished the performance, when I had to announce the encore, I spoke Romanian. So, as you could tell, I felt like home. They gave us such a warm and beautiful greeting that we felt as if we were on a Romanian stage. Really beautiful! It was a beautiful evening, at least for us. They requested two encores. The audience here really enjoyed the concert a lot. We already are on the fourth edition and I think it's time for foreign audiences to see not only these two extraordinary violins, but also some pretty sharp Romanians. I think it's time to start performing this duel outside our country, too.'