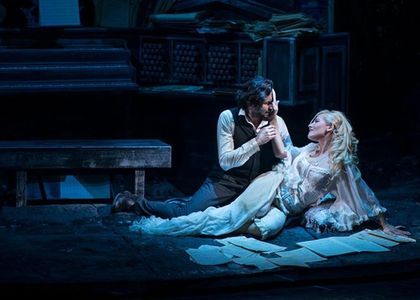 Monday, 26 January 2015 , ora 15.32
A new theatre for operetta and musical performances has just opened its doors on 24th January, with the Phantom of the Opera by Andrew Lloyd Webber, a title which, for almost thirty years, since it was first staged, has travelled around the world. These are the ingredients for a box office success, as in only several minutes, the tickets for the first two performances - of 24th and 25th January - were sold out. "A huge satisfaction"- stated Răzvan Ioan Dincă - general manager of the Bucharest National Opera House, to which the "Ion Dacian" National Operetta Theatre belongs: "We inaugurate with the Phantom of the Opera. It is the most longlived performance that this muscial genre has had and also the best sold performance in the history of musicals and we hope it will not betray its international success in Romania..."

A well-deserved joy, if we think of the fact that the new building situated on the banks of the Dâmbovița River is the first theatre built after 1989 and acts like a moral repair brought to a company which was inadequately hosted by the Bucarest National Opera House, until almost three years ago - in a hall without acoustics or an orchestra pit. The result - a modern construction, out of glass and metal, with customized spaces - in the foyer, there rests a chandelier made out of musical instruments - with a hall which hosts 550 seats and ensures a good visibility; a large, multifunctional stage, provided with all technical means necessary for rendering complex musical performances, such as The Phantom of the Opera. The evening which hosts this double event has been preceded, at 17:00, by a press conference in which Răzvan Ioan Dincă and the Australian director Stephen Barlow have participated; the latter revealed a few aspects from his directorial vision:

"I hope the public will manage to establish an emotional relationship with what will be going on stage. This musical is the composer's work resulted from uncomprehended, love suffering;... in love, you always have to choose and in the performance we can see how Christine faces the choice between the erotic desire towards a man, on the one hand, and the choice of a peaceful life with another man, on the other hand. The performance does not reflect what happens with the phantom, but what happens to Christine during the whole context. The story in itself is a combination between a complicated and complex love story with a lot of mystery and crime..."

At 19:00 the last gong is beaten, announcing the beginning of the long-waited premiere, The Phantom of the Opera, an original combination of musical and operette, the last being highlighted by the Australian director in a modern perfomance, just like the mosaicated music composed by Andrew Lloyd Webber. From the visual point of view, the performance attracted the public of all ages, while from the vocal point of view , we appreciated the voice and the performance of the soprano Irina Baianţ, together with two sonorous names pertaining to the theatre and pop music area: Adrian Nour and Florin Ristei. They managed to convey, beyond the stage, their own emotions in a performance in which we had the surprise to listen to a homogenous orchestra, well conducted by Ciprian Teodoraşcu. On 25th January, 2015, they have been the main performers of the Phantom of the Opera - a production to which we wish a success similar to the one it had, in London in 1986.