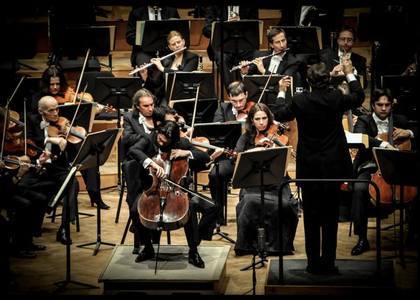 Journey between 1799 and 23rd January, 2015, with the National Orchestra of Belgium

Monday, 26 January 2015 , ora 9.17
I was able to listen to another Belgian symphonic ensemble, the National Orchestra of Belgium, at the BOZAR (Palais des Beaux-Art). Founded in 1936, the orchestra had, among others, André Cluytens as music director, it has collaborated with soloists, such as, pianist Martha Argerich or soprano Anna Netrebko, and it has had Andrey Boreyko as music director for the past two years.

In 2014 it was commemorated a century since the start of the First World War, under the Be '14 - '18 heading, Belgium suggests a series of events for the next four years, time span similar to that of the First World War. The work which was commissioned to the Russian composer Aleksandr Raskatov by the National Orchestra of Belgium and interpreted for the first time on Friday, 26th January, 2015, was included in this context. Written for wind and percussion instruments, contra-basses, and a passing soloistic three-violin-ensemble, Valse Adieustarted with the sound of the siren, which made room for simple but extremely pleasant melodies: extremely felicitous organ sounds, funeral march and military march, everything was interpreted in a waltz rhythm and also a dissonant one, like a slightly out-of-tune instrument. The music is interrupted every now and again by the sound of other sirens, and other times is covered by it - in the same way the war covers the life of a quiet country town; towards the end of the Valse Adie, the instrumentalists simultaneously, for several times in a row, intoned some powerful, violent, short and full of tension sounds, which were soon followed by a profound silence. The clapping started immediately, and composer Aleksandr Raskatov received them in person, while standing on the stage of the BOZAR (Palais des Beaux-Art).

The Cello Concerto in E minor, Op.85, by Sir Edward Elgar gave the impression that it was belonging to the same colour scheme, lacking extremes or contrasts: its quietness is specific to a domestic and quotidian life, the alert sections contain the hurry of the problem which needs to be solved fast, but whose steps which need to be followed are exact and known ahead of time, its melancholy is the one one's spontaneously meets during one's existence, its joy is rather specific to the people who are, generally, content with less. The moments of exaltation, which are very few, are immediately tempered, dimmed, in the same way a percussionist is asked to press his hand on the drumhead of the timpani to stop the vibration produced by the striking of the drumhead with the timpani mallet and which is responsible for the production of the sounds.

The star of the Cello Concerto, by Elgar, during which the soloist plays the cello almost continually, was Gautier Capuçon. What is special about this French artist is his capacity to make his music flow very naturally, like a story told by the fireside: he interprets the accents exactly as the composer wrote them and his vibrato brightens the longer sounds, but he isn't excessive, he does o't push or accentuate the sound unnecessarily. Nothing in his performance was strident, nothing put him into the spotlight more than it did to his music and the presto passages were interpreted in a very easy manner and they lacked any kind of ostentatiousness.

The introduction of the very condensed "The Creation" Oratorio, by Joeseph Haydn expresses the bitterness, the uncertainty and the pain which has existed before the creation of the world - this first movement is called Prelude. Die Vorstellung des Chaos. Conductor Andrey Boreyko took advantage of the fact that the fundamental note which contains the chords which end the prelude to Haydn's work is the same as the sound with which the Rite of Spring, by Igor Stravinsky begins with, and so he presented to the public these two works without any intermission in between. The gentle, limping, rather imprecise sound of the bassoon seemed to be part of the same primal chaos. The story of the scandal on both the choreography on pagan themes of the ballet and the music, with which Stravinsky accompanied it, is still known today. Today, even if the music remains unsettling, the cacophonies are bearable, the Rite of Spring sounds rather harmonious than socking - or maybe the ear of today's listener is more used to something else beside the harmony among sounds.

The National Orchestra of Belgium described everything that needed to be described, precisely as the conductor asked, with commitment and competency. It made Stravinsky scream and say tersely what he had to say, to support his viewpoint and to sprint. As in a conducting lesson, with precise moves, ceremoniously, in an aristocratic manner but friendly at the same time, Andrey Boreyko kept under control the superimposition of rhythm and melody, the agitation, incertitude or Stravinsky's meditations, and, in the end, both the musicians and the conductor received plenty of applauds from the public.