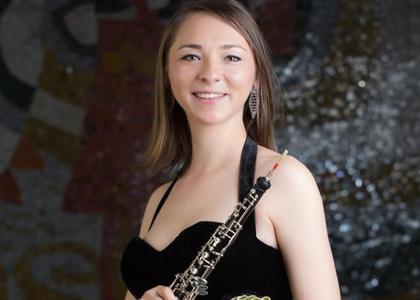 Wednesday, 28 January 2015 , ora 13.29
The instruments played on during the Tuesday Evening Season are more and more various - the recital's 'star' was the oboe. Handled with spectacular technical skills, such as those of a young musician, Felicia Greciuc, the oboe aroused the music lovers' interest who enjoyed a recital in which solo pieces alternated with chamber music. The oboist Felicia Greciuc offered a complex and difficult insight from pre classical to modern period alongside the experienced pianist, Cristina Popescu who plays two solo opuses: 'My solo insertions fitted very well because of their style: the first part has pre-classical influences and the second one was inspired from modern works. Felicia Greciuc is a very skilled oboist, a very ambitious girl, hardworking and talented; she is an honour for our oboe school.'

Born in Moldavian lands, in Suceava, where she fell in love with the oboe, Felicia Greciuc acquired an excellent instrumental technique at the National University of Music Bucharest and she improved her performing art by taking professional courses both in our country and abroad. She's been an instrumental soloist in the George Enescu Philharmonic for a year now and she continues to give recitals in order to show the public the beauty of the instrument she loves so much: 'It was a great pleasure that this evening I managed to delight the public and create a pleasant atmosphere. We decided to make a transition from Baroque to the twentieth century. We say that the baroque music may be simple, but it's not like that and Telemann's Fantasias prove it. We continued with a representative oboe sonata by Carl Philip Emanuel Bach, which was extraordinarily beautiful. The next one was Poulenc, a French composer whom I like very much; his music is very sentimental so I just had to play the Sonata for Oboe and Piano. The last piece was Dorati's Duo concertante, a very intense work both concerning the musical and rhythmic techniques.'

With their incursion from the pre-classical to the modern period, very rich in colours and timbre, with warm sounds, accurate intonation and great expressiveness, the oboist Felicia Greciuc and the pianist Cristina Popescu made a great impression to the public in the Small Hall of the Romanian Athenaeum, adding an encore from Carl Nielsen's works due to the public's repetitive demands.