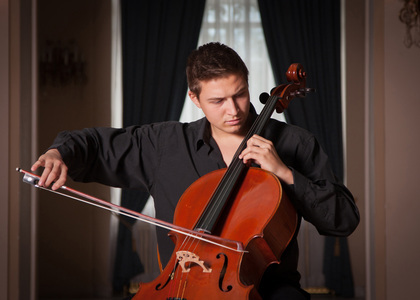 Wednesday, 11 February 2015 , ora 9.24
I eagerly awaited Ștefan Cazacu's cello recital who is currently studying at the University of Music and Performing Arts in Vienna. The young musicians who gained valuable experience in the last seasons of the Tuesday Evening Season are coming back now on the stage of Romanian Athenaeum. On 10th February, 2015, the Small Hall was indeed too small for all the people who came to attend to a 20th century programme presented by Ștefan Cazacu together with two other musicians also students in Vienna: the pianist Daniel Dascălu and the cellist Caius Hiticaș. This time too Ștefan Cazacu turned to be a charismatic musician, very expressive, with an excellent techique and rigorously trained. His evolution is mature and he proved it by chosing the programme he talked about: 'The Romanian public hasn't had yet the pleasure to hear Prokofiev's Sonata for cello and piano; I myself have never heard it before, so it was a first for me too. We thought that if we were to play Messiaen and Prokofiev, we could add something more from the twentieth century, so as not to create a very big difference. Therefore, when I met my colleague Caius Hiticaș I suggested him that we could make a trio. At first, we took into consideration Mozart or Beethoven's works in order acquaint ourselves, but we moved right on to Shostakovich. It's what represents us, and I think it was the right choice.'

Recently introduced to the Vienna concert, Shostakovich's Trio No. 2 in E minor was brought to the audience from Bucharest by the cellist Ștefan Cazacu and the pianist Daniel Dascălu as well as their guest, the violonist Caius Hiticaș. 'We felt that this particular opus fills us with positive energy, especially because is the first piece that we play together. It's a good thing to start off on the right foot and I personally think that this work helped us. I'm glad that we started this collaboration and I hope it will be a long one.'

The cellist Marin Cazacu - a very lucid critic of musicians' progress, especially of his son's, Ștefan - was also impressed by the programme which was offered to the music lovers:

'I really appreciated the repertoire they chose, those are three masterpieces of the twentieth century that use the cello at its own value. I liked it very much, each of them contributed with their personality and talent. It was clear that all three love chamber music because they managed to create an atmosphere that Shostakovich himself would have enjoyed. As a teacher and father, I am very glad of Ștefan's obvious evolution because for a musician the chamber music is perhaps the most sublime music. It is the one which confers a certain level and the hope that all that he will do, intrumentally speaking, will pass through the filter of the analysis which only chamber music can offer to an artist.'

The cellist Ștefan Cazacu, the pianist Daniel Dascălu and the violinist Caius Hiticaș are three musicians with different personalities who were maturely harmonized, in one evening which aroused public's interest by being on Tuesday Evening Season's poster.