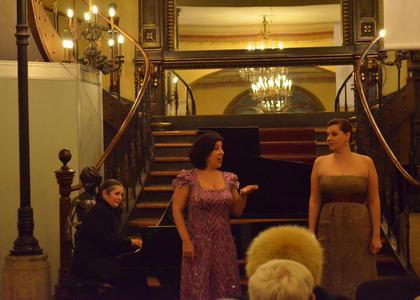 An Opera Recital... and Much More

Thursday, 12 February 2015 , ora 9.23
For a long time, the inhabitants of Bucharest have been used to coming, on every Wednesday, to the Museum of the Municipality to assist to the musical evenings within the season which has been held, for fifteen years, by the ACCUUMM Foundation, established by Petru Maier-Bianu and continued to the present moment by the pianist Verona Maier, which always puts forward diverse and appealing programmes.

Towards the middle of February, the Şuţu Museum was the host of a particular recital that joined together music and prose in a surprising combination which captivated the public and this was presumably what the ones who ideated the structure and the unfolding of the moments under the title ʻFrom Mozart to Gershwinʼ counted on. Of course the point of interest was the evolution of the two soloists of the Opera in Braşov - the soprano Anda Pop and the mezzosoprano Carmen Topciu-, who were accompanied at the piano by Verona Maier herself, who approached a difficult and varied repertoire, that was to make the most of their vocal and interpretive qualities. While Anda Pop has been, for a long time, a very well known name in Bucharest as well, either through the recitals that she held throughout the years, or through her apparitions (though very rare) in the performances of the National Opera (she is preparing for the eponymous role from Madama Butterfly by Puccini on the 8th March), favourable comments or echoes of the apparitions of Carmen Topciu abroad have been heard for the last years, however, only now did we manage to trully discover her, which, to me, was a revelation in every aspect: her ample, warm and shining voice, of such a beauty that immediately draws the attention, equal in all the registres, guided with a remarkable technique and musicality and doubled by expressiveness and burning passion of the characters she plays, with a sincerity and a temper which ʻbetraysʼ a special interior fullness. These were qualities I have found in abundance in the arias from The Semiramide by Rossini, Joana D'Arc by Tschaikowsky or Carmen by Bizet, but also in the duets performed together with Anda Pop, chosen by Cosi fan tutte by Mozart and from Rossini's work, the soprano preferring arias from The Marriage of Figaro by Mozart, Rusalka by Dvorak, Pagliacci by Leoncavallo, rendered with emotional committment and devotion, her generous voice, usually vibrant, her stage experience put an imprint on her manner or singing. The audience didn't pay much attention to some stridences that were heard especially in the high-pitched register, but appreciated the ease with which she got through the pages which were stylisticaly so different, and the both soloists easily shifted from the Mozartian writing to the Romatic or Verist one, which proved the fact that they posess genuine skill in this realm and an adequate pronunciation of Italian, French, Russian and Czech.

The programme was intended to be ʻdifferentʼ, so that the actress Andreea Măcelaru-Şofron convincingly read a monologue from the play Master-class by McNally, performing the role of Maria Callas, but also a dialogue with the ʻstudentʼ, who was well contoured by the actress Luminiţa Erga; the two were also to be seen in the dialogue scenes by Wilde or Faydeau; and while the first sequences were somehow related to the opera evening, the next were totally out of context, which was counterbalanced to a certain extent by the convincing and nuanced performance.

And the end brought another abrupt change in atmosphere and array, because for the pieces by Gershwin the actor Filip Ristovski (and graduate of the canto class of the National Music University Bucharest, where he teaches the opera class) was invited, also an employee of the Opera, maybe because of his pleasant and charismatic bearing and of his graceful movements, although his vocal performance remained totally scarce, which was proven both through the melody he covered as a solo and through the duet or tercet in which his non-qualitative timbre with ʻbluntʼ sounds was in contrast with the full and beautiful sonority of the voices of the two soloists; and to crown all, the actor gave out the most high-pitched sounds, while the soprano Anda Pop and the mezzosoprano Carmen Topciu - which are trully formed accordingly, convinced us they could approach a composition close to a musical, but also the dancing move required by the pregnant rhytm. To be honest, I would have preferred it without the last segment, or have Gershwin sung in such a manner that the entire recital keep the unitary value quota at the artistic level of the opera pages, thus avoiding the ʻadditionʼ of an ending which transferred to a whole different area (not only stylistically) a good music night, offered by professional interpreters who know what to sing really means.

But what was important for the organizers is the fact that the audience was delighted, amused and clapped with enthusiasm, which is a signe that the musical soiree was successful as a whole and that the audience will come back in the weeks to come at the Șuțu Palace (also) to discover what other interesting guiding marks the ACCUUMM season will put forward.