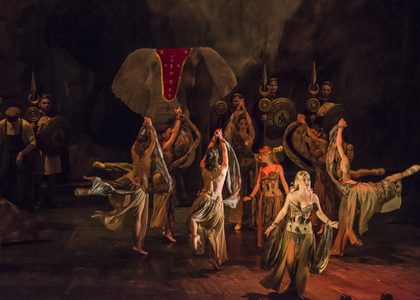 Friday, 30 January 2015 , ora 9.45
Standing ovations, cries of "Bravo!", shining looks and enthusiast comments after the curtain's fall are the indubitable signs of the success. The performance of The Phantom of the Opera, which inaugurated the new headquarters of the "Ion Dacian" National Operetta and Musical Theatre in Bucharest, on 24th January, benefited greatly from these manifestations of sympathy. They occurred again the following day, when I too had the pleasure of being present in the auditorium from the Octavian Goga Blvd., No.1 (near the National Library). It is the first theatre built in Romania after the year of 1989 (contractor: the Aedificia Carpați SA, president: Petre Badea, engineer, project manager: Eliodor Popa, architect). The auditorium, the foyer and the annexes were intended to be elegant, pleasant, to have an original decorum and the soft glow of an intimate and coquettish interior. The technical endowment of the stage is impressing. Only under these circumstances can the musical shows be staged in grandiose settings. The proof is the best montage of the Phantom of the Opera, which marks a referential moment in Romania's history of musical theater. I think the budget, too, which was amazingly generous … 400.000 euros!, will remain in history. Everything is possible under these circumstances.

Nowadays, the "Ion Dacian" National Operetta and Musical Theatre in Bucharest is a company which belongs to the Romanian National Opera and which is a public cultural institution subordinate to the Ministry of Culture. Ever since he took over, Răzvan Dincă, the general manager, has tried to offer the public brilliant and original shows, to whose production participated prestigious foreign guests. The Australian director Stephen Barlow, who realized a new, modern, but, especially, interesting as vision, Rigoletto, by Verdi, on the stage of the Romanian National Opera, is one of them. The artist was offered a collaboration agreement contract, which had the Phantom of the Opera performance at stake. Being a very well connoisseur of the musical theater, we are also mentioning the fact that Stephen Barlow was co-director of the most recent musical which was performed on the stage of theWest End theatre in London and which is called Marguerite, and one of the directors of the Jesus Christ Superstar musical tour in the UK - indeed, the artist, who was seconded by scenographer Andrew Riley, choreograph Ewan Jones and by the lightning designer Howard Hudson, managed to create an imposing concept, one different from the original, which had its absolute premiere in 1986, which was almost 30 years ago, when the West End theatre in London opened its doors.

It seems worthy of taking into consideration the fact that the direction of a musical performance shapes characters which have little in common with their interpreters. During the three decades of the Phantom of the Opera - and this concept can be generalized to every successful musical spectacle such as Cats orLion King - it was an identical performance every evening and it was (almost) irrelevant who the performers were. Stephen Barlow and his team are breaking the monotony and he keeps the details which are absolutely necessarily while getting the right to a Phantom of the Opera performance in his own vision - for instance, the boat - and he changes the decorum and reimagines the actors' performances inside the new space. We are finding ourselves in the new building of the Opéra Garnier in Paris, which we are visiting from its dark basements, through its famous foyer, through the stage and to its domed roof. The decorum is made according to reality. And surrounded by this décor, which has a sensibility and an ebullient imagination, the director is envisaging, in the minutest details, the game of the actors, their gestures, movements, the relationship with other characters, feelings, expressiveness, existence … No detail affects the perfect harmony of the whole, and the imagination leads to absolutely wonderful moments, as the scene where the famous golden statues, which support the great chandeliers from the foyer, descend and start dancing alongside the masked pairs.

The Phantom of the Opera is a science-fiction love story. A Pygmalion, the Ghost, who is a passionate composer turns the little dancer Christine Daaé into a wonderful soprano, falls in love with her, makes use of his force to isolate her from the real world and ends up giving up on their impossible love, overwhelmed by contradictory feelings, where the ugliness of his face plays an essential role. The mystery, the smoldering passion, the tragedy of a tormented soul and the paroxysm created by the self-sacrifice, the perfection of the artistic act is the purpose of all these intense feelings, which go very well in the new context. And the success is absolute when the characters find their voices and take shape through the talent of some exceptional and young interpreters.

The longevity and the success of the Phantom of the Opera performance divide equally between the beauty of the music and the opulence of the montage. The score keeps alive the love story between two emblematic figures of the musical theater, who are the composer Lloyd Webber and soprano Sarah Brightman, over the years. Supported by genuine feelings, the music is loaded with emotions and feelings which are not always of the bright kind.

On the contrary, the Ghost is a tragic character who, before his great capitulation, fights for the idea of fulfillment and happiness, sometimes through extreme ways. The role is not very generous with the interpreter, because he cannot use his eyes, smile or tears. Half of his face is covered by a mask. What else remains for the singing actor? His voice and his body. The director built the character through his moves, gestures, and especially through his emotions and feelings. The music comes to enhance the image through the colour of the sounds, the arching of the phrases, the bitten words and especially the emotions of the character. I do not think there could have been a better interpreter than the actor-dancer-singer Adrian Nour. The dialogue in prose is not a problem for him. He is a member of the dance companies directed by Gigi Căciuleanu and Dan Puric. He was a finalist of the Vocea României singing competition in 2013. But above all, he has a sensibility, a capacity to identify himself with the character, an honesty and dedication to what he does. The director used these features to shape an extremely difficult role impeccably, which Adrian Nour interpreted wonderfully.

His stage partner is soprano Irina Baianț. The role of Christine Daaé is one which any musical performer wants to play - Christine is young, beautiful, she wears shinning costumes, she is always the center of attention, she loves, she is loved and she is tormented …. But even this character needs, in terms of movement, to be carefully outlined by using the nib of the pen, because the traps of a formal, obsolete and empty game are lurking on every corner. Again, the bright mind of the director shaped all these details impeccably and each attitude and gesture support and transmit feelings and especially emotions. Irina Baianț is, both vocally and theatrically, shinning. Her performance is in perfect harmony from the first to the last sound. Her experience as an opera and operetta singer is helping her enormously, even if what she does is entirely new and the singer certainly studied profoundly the details specific to a musical interpretation, with its specific non-vibrato, with the half-sung phrase-endings, with the whispers and shouts the score asks for. The spoken dialogues are also remarkable, which are always a problem for a singer who was educated in the classical canto tradition, but not for Irina Baianț. In her interpretation, the role of Christine Daaé became a very difficult to exceed by any other singer who wants to join the cast.

Everything I have said about the interpreters of the two leading roles remains valid for (almost) all artists involved in the show. I am now returning to the talent and imagination of the director, who found the right clothing for each role so that, in the end, everything would be perfect. And, given the cast he was offered to work with, he managed to keep the cracks to a minimum (Florin Ristei and Alexandra Giurcă). The theater's orchestra was prepared by Istvan Sillo and conducted, during the night of the premiere, by Ciprian Teodorașcu. I believe that we have to give more credit to the Magyar musician, who is a professor at the National University of Theater and Film Arts and a conductor of the Budapest Operetta and Musical Theatre, the signer of many recordings for EuroDisney in Paris, a musician who has countless musicals, such as West Side Story, Mozart!, Romeo and Juliet, Sleeping Beauty, Rudolph, Elisabeth, and Cabaret, in his conducting repertoire.

That does no mean that we do not appreciate the contribution of the Romanian opera and operetta conductor Ciprian Teodorașcu or that of the choir maestro Gabriel Popescu.

I am certain that the montage of the Phantom of the Opera on the stage of the new Bucharestian theatre is a great success. What troubles me a little - it has something to do with the theatre, firstly the operetta theatre and then the musical theatre! - is the fact that the soloists sang using voice amplifiers (which is a common situation for a montage like this one), but, when Irina Baianț's microphone got disconnected, the soprano's voice was almost incapable to reverberate around the auditorium. Also, the orchestra (unamplified) did not always sound like a harmonious and compact ensemble. What will happen to an operetta performance, such as the beloved Die Fledermaus and Der Zigeunerbaron, which the artists of the theatre have in their repertoire, in relatively recent montages and which the public appreciates and wants to see? It remains to be seen.