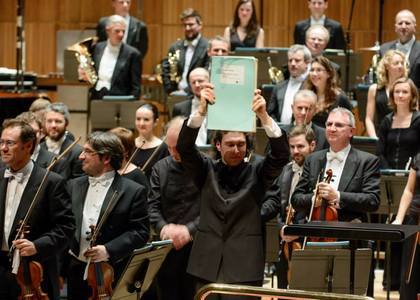 'Symphony No. 3', by George Enescu Performed in London

Monday, 9 February 2015 , ora 10.06
The 235 musicians of the London Philharmonic Choir and Orchestra interpreted for the first time the Symphony No.3 in C major, with chorus, Op.21, by George Enescu in front of an audience of over 2000 people last Saturday.

Applauses were heard for four times in a row in the auditorium of theRoyal Festival Hall of the famousSouth Bank's Cultural Centre in London at the end of the concert, which took place on Saturday, 7th February, starting at 19:30 (GMT). Conductor Vladimir Jurowski, who decided to include the Symphony No. 3 in C major, with chorus, Op.21, by George Enescu in the international repertoire of the orchestra after he and his orchestra had interpreted it during the 2013 Edition of the 'George Enescu' International Festival, raised the score of the Enescian work up, so that the public could see it.

The Symphony No.3, by George Enescu, which was initially interpreted during the 2013 Edition of the 'George Enescu' International Festival by the London Philharmonic Choir and Orchestra, arrived in London, at one of the most important international classical music event on this weekend, which was a premiere for Romania.

The London Philharmonic Choir and Orchestra, conducted by Vlaimir Jurowski, interpreted for the first time on a Londonese stage, in front of an audience of over 2000 people, the Enescian work. 115 instrumentalists and 120 artists of the choir - the Enescian score includes a children's choir too, got on the stage of the Royal Festival Hall and interpreted the score of George Enescu's work on Saturday, 7th February.

It gladdens us very much to have included George Enescu's music in our orchestra's programme, pointed Timothy Walker, the artistic director of the London Philharmonic Orchestra. Also, he announced another premiere in front of the public in London: during the 2017 Edition of the 'George Enescu' International Festival, the London Philharmonic Orchestra, under the conducting baton of Vladimir Jurowski, will interpret Oedipe, one of the works which brought George Enescu the international acclaim.

The 'George Enescu' International Festival's organizing committee had started to discuss with maestro Vladimir Jurowski about the possibility of performing in the festival in 2010. He wanted to interpret one of Enescu's works and I suggested the Symphony No. 3 to him. Three years later, the reputed conductor was getting on the stage of the Pallace Hall and was bringing in front of the public his own interpretation of this Enescian work.

The famous conductor Antonio Pappano, who was also in the audience at the Royal Festival Hall, was fascinated by the Enescian work and said that he wanted to interpret the Symphony No.3, by George Enescu, alongside the Orchestra dell´Accademia Nazionale di Santa Ceciliaduring the next edition of the 'George Enescu' International Festival.

Among the key figures who were present at the concert in London were Baroness Prashar of Runnymede CBE, who is the deputy chair of the British Council in London, Sir George Iacobescu, who is the chairman and chief executive officer of the Canary Wharf Group, Andrew Popper, who is the chief of the Romanian Royal House, as well as actress Anamaria Marinca.

There will be interpreted twenty works belonging to the Romanian composer, during the 2017 Edition of the 'George Enescu' International Festival (30th August - 20th September, Bucharest). Among them, the famous violinist David Garett, who broke the World record for the fastest playing of the violin - thirteen notes per second - will interpret theBallad for Violin and Orchestra, Op. 4A on the stage of the Romanian Athenaeum. Also, the American orchestra San Francisco Symphony, winner of a Pulitzer Prize for Music will interpret a work of the Romanian composer. Internationally reputed names, such as the Berlin Philharmonic and violinist Anne - Sophie Mutter, will perform for the first time on the stage of the Festival.

On the occasion of the London premiere, The Romanian Cultural Institute in London organized the Enescu Month in London, which featured several debates and concerts and which took place at the headquarters of the institution in London.

Further details about the Festival can be found bellow (for press): Ana-Maria Onisei (anamaria.onisei@omavision.ro; 0752220420).