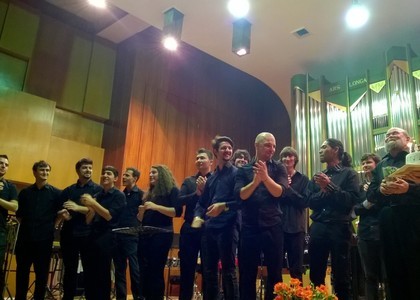 Monday, 23 February 2015 , ora 10.50
The 'Game' Ensemble celebrated two decades of existence on the stage of the National University of Music, Bucharest with a concert that took place on Friday evening, 20th February, 2015. Liviu Dănceanu, the composer of Game, the first song of the concert, told us more about the significance and importance of this ensemble in Romania: 'I've been friends with the 'Game' ensemble for two decades, since they first started. I had the honour of giving this ensemble a name - 'Game' - which means 'to play', 'to perform', but which also means 'prey' in English; however, etymologically it means 'musical scales', which is a syntagm used in our profession. It's an admirable thing that this ensemble exists. Regarding their collaboration, we had some works, from the 'Game' ensemble, Luxuria; and I believe its existence is for the benefit of Romanian music, and the way they are now given the possibility to keep on with their work and do great performances'.

Sorin Rotaru inaugurated the latest instrument acquired by the University, the bass marimba, and played Keiko Abe's Marimba d'Amore. Losa by Emmanuel Séjourné, Uneven Souls by Jovan Živković and Ionisation by Edgar Varese -were the songs that continued the concert.

The student Irina Rădulescu spoke about being part of this ensemble and of the difficulties of modern and contemporary repertoire: 'I have learned to play in this ensemble and I'm glad to be part of something that was created 20 years ago and I hope to continue its existence from now on. As percussionists, we deal with the contemporary repertoire which adds difficulty. New music is very meticulously written.'

Alexandru Matei, the founder the 'Game' Ensemble, both conductor and musician, talked in the end about promoting new music and also about the mission he has in teaching his young students in the percussion class: 'It means tons of serious work and commitment, great respect for any work, lots of passion and, as I was saying at the beginning of the concert, especially about the young, if I'm able to help them make a long, short and medium term plan from which they won't deviate. Unfortunately, the times we are living make it difficult for a young to anticipate what he will be doing in the next 10, 20 or 30 years; it's very hard, but that doesn't mean it's not possible.'