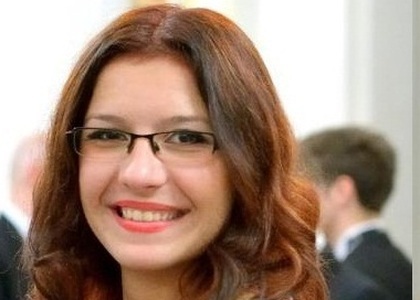 Tuesday, 24 February 2015 , ora 12.16
On the launching platform of the Tuesday Evening Season we listened to, on 24th February, a young talented musician who performed a unique recital, presenting works played on both the violin and the viola. At first, a little shy, Iulia Adriana Cazacu performed the passages of virtuosity with confidence, easiness and relaxation and, not the least, expressivity, at the Little Hall of Romanian Athenaeum. Of course, not only the sonority of her name - which has the background of a family of musicians - but also her past successes - Iulia Adriana Cazacu being a violinist who has won many national competitions and a participant in Masterclasses - attracted a large and enthusiastic public who filled the Little Hall of the Romanian Athenaeum.

The experienced pianist Veronica Maier who performed with the young musician spoke about her talent:

A very difficult and very well structured programme. I think that beginning with Prokofiev, ending with a work of virtuosity and by playing on each instrument, were an inspired choice and I sincerely hope that at one point she would decide on which road she would go, professionally speaking. Of course, being able to play on two instruments she has all the reasons to aspire to very good positions.

Iulia Adriana Cazacu is a sensitive musician, who performs well and is a very good professional. She offered the music lovers a musical route and a difficult and varied repertoire in which there were opuses signed by Serghei Prokofiev, Edvard Grieg, Manuel de Falla, Serghei Rachmaninoff and David Popper, about which she said:

I have chosen this repertoire to place me in a good light; it is chiefly a Romantic repertoire, which I love interpreting. I adore Prokofiev; that is why I played his compositions on both instruments and I hope it sounded wonderfully. This is the choice I wanted to make. As I have two violinists in my house, I have always been inclined towards grave instruments, so I chose both a viola and a cello piece.

Marin Cazacu, her father, was also there, a lucid commentator concerning the performance of the young artist:

Due to her repertoire on these two instruments, the violin and the viola, Iulia Adriana Cazacu demonstrates that she has the characteristics of a musician capable of having a beautiful career on the stages of our country and not only.