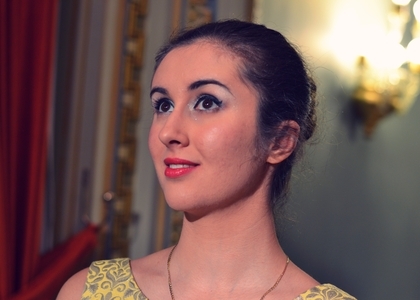 Wednesday, 4 March 2015 , ora 12.51
A constant presence on Tuesday Evening Season, the pianist Sânziana Mircea returned once more on the stage of the Small Hall at the Romanian Athenaeum. Sânziana Mircea is a musician who fills the entire room with her charisma, a pianist beloved by her audience, which is always expecting her eagerly to perform her recitals which are equally difficult and interesting. On the occasion of each recital, Sânziana Mircea proves herself to be mature and having a well-established way of thinking, as well as a strong self-countenance during the programmes, which are carefully planned to the smallest details. On 3rd March, the overcrowded hall where Sânziana Mircea performed was surrounded by a romantic aura, through the works that she included in her recital belonging to Beethoven, Chopin, Rachmaninoff and Alberto Ginastera; a musical selection about which the young pianist stated :

'It is a very romantic programme, although Beethoven is not considered as such in the musical world, but to me this Sonata Op. 2 No. 3 in C major feels like an opera, I can simply see the characters going on stage, and I really had fun tonight when I performed it. Next I performed Chopin's two opuses which are quite different, but tied together by the same dreamy atmosphere. In the end I wanted an opus to struggle with a little, which is why I chose Rachmaninoff's Sonata No. 2. It is a challenge, a work which seems to me like a mirror broken into thousands of pieces, in which certain parts of the theme are reflected, but never entirely… It is a perpetual search of the whole picture. By closing the night with Rachmaninoff I was unable to leave the Russian culture, so I dedicated the first encore to the memory of the pianist Aldo Ciccolini who passed away, and who said that if he were to choose a single song from all the piano works, his choice would be Pictures at an Exhibition. That is why I chose for my encore The Old Castle, and then I went back to Rachmaninoff Musical Moment No. 6, Op. 16…'

Sânziana Mircea's enjoyment while playing gets across the footlights and the audience can see beyond her talent, her sensitivity, her warm tone and her excelent technique that she is really excited about being with those who love her:

'It is a great joy for me to be here every year, I expect this night almost as if it were my birthday and I always meet a lot of friends… It is wonderful…'

On 3rd March, Sânziana Mircea held another recital at the Small Hall of the Romanian Athenaeum. With her every move, she proves that she has an outstanding talent, she shows that she has reached her artistic maturity, and she reassures us that she is capable of having a great pianistic career.