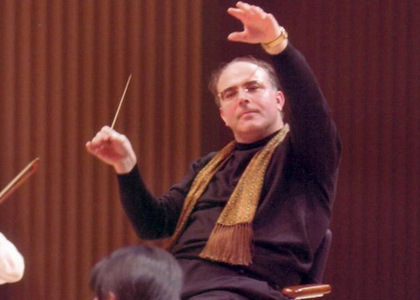 An Evening of Great Music

Friday, 6 March 2015 , ora 14.29
Beautiful, difficult and demanding, Anton Bruckner's music is played in Romania, unfortunately, very rarely, so the scheduling of an opus of his season creation becomes in itself quite an event, amplified, of course, in as far as the performance manages to rise up to the expected standards. And on Wednesday, March 25th, 2015, at the Athenaeum, this 'wonder' took place, conductor Camil Marinescu making a comeback on the 'home' stage after a considerable absence, continuing the Bruckner cycle with Symphony No. 8, after, previously, also at the desk of the Bucharest Philharmonica, he had proposed Symphony No. 9. His passion for large, complex scores, difficult enough for the public to be captivated by the flow of music is known, Brucker being the perfect choice for the artist that is drawn to the greatness of works so incredibly resourceful, perfectly built for his interior structure, becoming, perhaps, a bet with himself that he won this time as well.

With gestures completely different from the angled and incisive ones from his starting years, Camil Marinescu conducted with wide moves, apparently pretty restrictive in terms of communication, but effective and suggestive for the instrumental performers, achieving a flawless clarity of every theme, an accurate outline of the 'whole' which had many unique aspects, but integrated into the endeavour of an ensemble, in the 'great' line of the monumental work. Constrasting sound levels, well graded in assemblage, with moments of crescendo-descrescendo permanently supported by an expressive motivation, sequences of a barely suggested transparency, full of poetry, perhaps meditative, interiorized, alternating with bursts, amplified by the brasses the composer made heavy use of, with a remarkable intensity in the limits of balance, never in excess, also carrying the 'weight' of a philosophical touch and the magnitude of generous sentences, all with a deep, expressive, 'true' vibration, in a well-drawn and captivating logic, the orchestra answering the conductor's requests with a dedication that showed a real pleasure of being a part of 'music-making'. And it was permanently felt that the conductor 'led' the ensemble into his inner world, full of thoughts and feelings, decoding, with an extraordinary understanding, the symphony in which specifically Bruckerian (post)Romanticism, powerful, marked by hidden unease in rigor and sobriety, in the loneliness of such a special sensitivity, is brought to life with a clearness that the conductor really understood, giving the public a performed version with an impressive (I'd say) density. It's been a long time since I've heard such masterful sounds, at the Philharmonic, a well mastered homogeneity betweeninstrumental sections , with precise (and synchronized!) attacks, with airy violins, grave chords of a bearing richness, excellent blowers (the mistakes of some going into the background), with short, sensitive soloistic interventions, all in a show of plasticity and captivating expressive coherence.

Even if, surprisingly, there were a couple of empty seats in the Athenaeum's hall, perhaps the music lovers (even those subscribed for decades) are still reluctant when it comes to the accessibility of Brucker's music, maybe because the weather wasn't very good, the audience were captivated by the beauty of Symphony No. 8, the best proof being... the lack of the 'mandatory' 'coughing' after each part of a work, violently'only at the end of the first part, 'forgotten' afterwards, the audience listening in a quietness that ruled over us all, as it happens only when the artists manage to take us into their and their composer's world through a highly skillful performance. And continuous applauses fully rewarded the artistic endeavour made by the Orchestra of the Philharmonic led by Camil Marinescu, an excellent conductor that, unfortunately, has his name too rarely written of the posters of our current seasons, but who every time persuades us that he's a musician who... has something to say and does it with sobriety and passion.