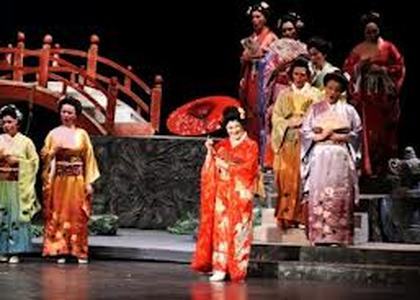 Monday, 9 March 2015 , ora 14.28
Perhaps bearing in mind the fact that March 8th is the International Women's Day, the Bucharest National Opera scheduled, for that evening, the first season performance of Puccini's Madama Butterfly, at the same time proposing several intersting choices for the cast, the role of the infelicitous geisha being tackled by soprano Anda Pop (from Brașov), who is a laureate of the 9th edition of 2007 of the famous 'Butterfly' competition. A character that the soloist deeply adores, that she performed on stages in the country or outside it and that now, finally, she embodied in Bucharest as well, fully confirming that she (also) has a voice perfectly adequate to the score, that her technical and expressive data help her with the extremely demanding part, with a plethora of colours and moods that received, in the end, the big hand from the public that filled the hall. Because, indeed, her 'powerful' voice, her inner vibe, the warmth and fairness with which she builds the role, the scenic gestures and the attitudes clipped from the Japanese culture, the often impressive sensitivity and dramatism with which she lives and transmits Cio-Cio-San's drama, were the 'ingredients' which allowed her, throughout the entire show, to capure and strike cords, permanently staying 'in character', maintaining, from the first to the last second, a unity and range carefully tracked in its balanced evolution, from the nearly adolescentine ingenuity and commitment in act I, going through the calm and serenity that she feels in order to go over and even refuse accepting a harsh reality, until the last picture in which, before the lethal gesture (that she also bears with a well-highlighted inner peace), she hugs her baby, singing the aria with incredibly powerful accents on an emotional level, affecting the public immediately. Of course, an 'argument' in favor of such a reaction was also the fact that her own daughter, Sara Gyorfi, had her debut at the Bucharest National Opera, playing as the Child.

Unfortunately, her partner (sort of...) was tenor Igor Țurcanu (from Chișinău), not at all involved in creating a credible Pinkerton, permanently singing with his face toward the conductor, immobile, even in... the love duet, the quality of his voice being heard only in the emphatically exposed high pitch, while remaining virtually non-existent for the rest of the play. And with Sharples, bariton Valentin Vasiliu was, as usual, impersonal and sure-footed, yet surpring, in the first act, through his 'octave' singing, even though I didn't notice any vocal problems later on, probably feeling as if he was at a rehearsal, attitude through which he was completely ignoring the fact that the audience... can hear and even know (at least partly) what he should... properly... intone. In contrast, mezzosoprano Oana Andra became a sensitive Suzuki, delicate and prolific, both from a vocal and a scenic standpoint, her voice perfectly 'matching' the soprano's, and not just in the famous duet of the second act.

With Goro, tenor Lucian Corchișwas fair but pretty liniar, bariton Florin Simionca had an adequate appearance with Yamadori, but...couldn't really be heard, bass Horia Sandu was far from the incisiveness of a... angry... Bonzo; other roles being performed with the same accuracy by soprano Cristina Eremia, baritone Vasile Chișiu or Adrian Ionescu. The choir sounded beautifully and homogenously (choir master - Stelian Olariu), as well as the orchestra that outlined the symphonic sequences with well differentiated hues, in which, unfortunately, the brasses had an exaggerated intensity, often covering the soloists' voices; but, possibly, this might have been the request of conductor Alexandru Samoilă (from Chișinău) who, once more at the BNO after a long absence, conducted now with firm and clear gestures, ensuring the logical construction of the musical speech, but also capturing the tempo changes that heavily tested the relationship with the audience as well as... the protagonist's breathing (especially the large aria).

Overall, the Puccinian opera performance was successful, the multitude of the audience confirming the fact that music lovers would wish to hear their beloved Madama Butterfly more often during the current season, generously cheering the performers, and especially Anda Pop, a soprano who deserves to be constantly invited to the BNO concerts, since the theatre does not have a proper soloist for the difficult role of the main character.