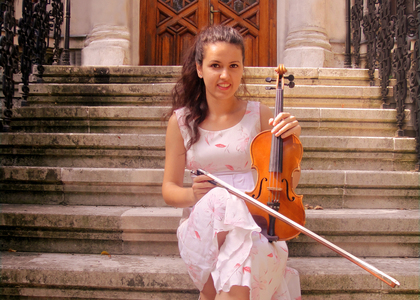 Wednesday, 11 March 2015 , ora 9.47
With each day, music lovers become more and more delighted by the young people's performances on the stage of the Small Hall of the Romanian Athenaeum. On 10th March, 2015, during the Tuesday Evening Season programme the violinist Georgeta Iordache was presented- a young lady with an important career , who held many recitals at the Radio Hall and the Romanian Athenaeum, and outside the country, too, in Tel Aviv and Bruxelles. Georgeta Iordache started attending the Academy of Music and Dance in Cologne last autumn and she is a fellow student of the appreciated violinist Ariadne Daskalakis. I have seen Georgeta Iordache preoccupied with the sounds' accuracy and the expression with which she phrased - while building her interpretation along with the experimented pianist Clementina Ristea-Ciucu - the performance in which they played Bach's Partita No. 3 in E major and three sonatas belonging to Brahms, Beethoven and Ravel. An ambitious programme that the young musician ventured herself to perform, a long and difficult one, about which she stated:

'… I've chosen it many months ago with great care. I've been collaborating with Clementina Ristea-Ciucu for a long time and we agreed to play more sonatas, to perform chamber music and we also wanted to have an extremely varied programme with songs belonging to many eras. The best one for me was Ravel… I love him, he is my favourite composer. At the Athenaeum's Small Hall we played two years ago and I can say that the acoustics are marvellous, I felt good every time… The acoustics of a hall are very important…'

The violinist Georgeta Iordache ended her recital with an encore from Camille Saint-Saens' creation and she was extremely precise with her bow strokes, proving in this way during her entire performance that she is a smart and sensitive instrumentalist with a warm tone and who enjoys playing a lot; and she generously shared her joy with the audience. We will certainly hear more about her interesting career.