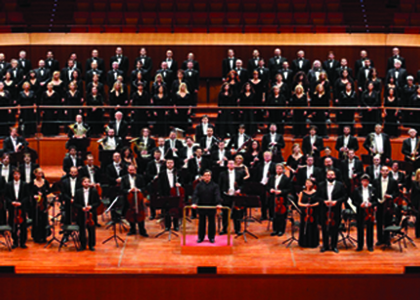 Wednesday, 18 March 2015 , ora 9.41
An extraordinary concert with a 1585-born orchestra, alongside a conductor who received a nobility title in 2012, and a violinist who is playing on a Stradivarius violin, which was built in 1727.

Nothing is more appropriate than the interpretation of the symphonic poem the Sorcerer's Apprentice, by Paul Dukas, which is a miniature opera, in order for this ensemble to show what it knows to do, how colourful, expressive and variously it can interpret and how plastically, eloquently and docile it can be. The Accademia di Santa Cecilia Orchestra is one of those perfect ensembles, which creates with every moment something, different, because their performances are never repetitive, only strict in relation to the notes written on the score, which need to be interpreted: the instrumentalists of the Italian ensemble performed as if their very own chances of survival were depending on that.

After that, violinist Janine Jansen interpreted the Violin Concerto in D major, Op.35, by Piotr Ilyich Tchaikovsky in such a controlled and beautiful manner that it made you hold your breath and, if you weren't present in the audience only for a singular musical evening, but also on business, their performance made you forget you had to write a review and listen carefully to how much artistry the violinist interpreted. The emotional charge of the score was oversized by the temperamental interpretation of the Dutch artist; as a soloist, Janine Jansen argued with Sir Antonio Pappano, she snapped or murmured, and, during her moments of freedom, she watched, actually she monitored, as a detective, the symphonic ensemble and its interpretation of the music. Accompanied by the Accademia di Santa Cecilia Orchestra, Janine Jansen showed the public the whole scenic and dramatic character of the Violin Concerto in D major, Op. 35, by Piotr Ilyich Tchaikovsky, and she was accompanied by the same orchestra during the performance of the encore, - the Mélodie in E-flat major from the Souvenir d'un lieu cher Op. 42, (arranged for violin and orchestra by Alexander Glazunov), by Pyotr Ilyich Tchaikovsky - when she appeared both calmer, and more serene.

The Symphony No. 4 in D minor, Op. 120, by Robert Schumann, which is a mélange of both pathos and hope, was the last title announced on the evening's poster, and conducted by Sir Antonio Pappano. Imagine an embroiderer creating an embroidery; each punching of the needle has a purpose, and that purpose is indeed reached. The beginning and the ending of a feature which take to a result, and during this process more and more consequences are born, a permanent art, and an infinite succession and a becoming. Or imagine a monarch who orders what must be done and how it must be done and who, at the same time, creates the mater which he works with. This is how Antonio Pappano appeared in front of the public, during the concert which took place on the stage of the BOZAR, and whom he ended with three encores - the overture of the opera the Force of Destiny, the Dance Of the Young Moorish Slaves, by Giuseppe Verdi, and the Overture to William Tell Finale, by Gioachino Rossini. After the interpretation of such overtures and after such a wonderful performance, there is nothing that one might need for a very long period of time, and you don't even need to listen to the rest of the opera; everything that all these music works express - anxiety, reproach, painful questions and the building of a continuous evolution - consume you, even if they enchant you. Sir Antonio Pappano and the Accademia di Santa Cecilia Orchestra in Rome were wonderful during the whole performance of these works, even during the performance of the encores.