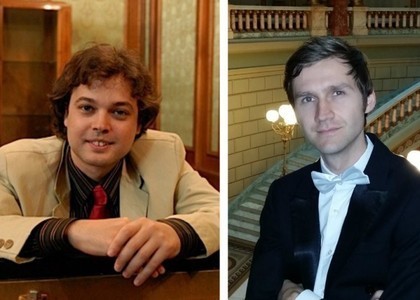 On Tuesday evenings, the Small Hall of the Romanian Athenaeum becomes more and more often an oasis, where music is made with talent, commitment and passion. On 17th March, 2015, music lovers listened enthusiastically to the cellist Octavian Lup and the pianist Andrei Licareţ performing on stage. They are two young men who are on their way to being acknowledged as great artists, both in the country and outside its borders. Beethoven, Schubert, Chopin and Schumann are the composers that have been chosen by the two musicians in a programme that received the appreciation of specialists, such as, the cellist Marin Cazacu and the pianist Verona Maier:

'Their creativity is out of the ordinary, they are completely committed, as we were able to notice this evening. Their fantasy is something rare. Octavian Lup's partner the pianist Andrei Licareţ was just as good.' (Marin Cazacu).

'It seems that this recital was a good example of good collaboration between two partners. I thought the collaboration between the two young musicians was amazing, and Andrei Licareţ's pianistic was extremely exquisite. Their communication was very warm and I'm honestly hoping that their searches, which have certainly lasted a long time, have finally come to a lucky ending....' (Verona Maier).

I noticed a very good communication between the cellist Octavian Lup and the pianist Andrei Licareţ as well, they left the impression of being two musicians with a great concertistic experience in this formula, and also two instrumentists who know each other very well and they complete each other during their performances, which is why I asked them to define one another's personality:

'Andrei has a strong personality, I think we both do, and he is extremely polished and has a lot of understanding, because after all this is what music is about, understanding what the other one wants...' (Octavian Lupu)

'Octavian is restless in a good way, he is a seeker, he has a lot of imagination, an extremely beautiful sound and he is very inspiring when you work with him. He is very lively... very colourful...' (Andrei Licareț)

The pianist Andrei Licareț and the cellist Octavian Lup showed sensitivity, innovation and excellent communication, and they were applauded by the public which enjoyed another Tuesday Evening Season at the Small Hall of the Romanian Athenaeum.