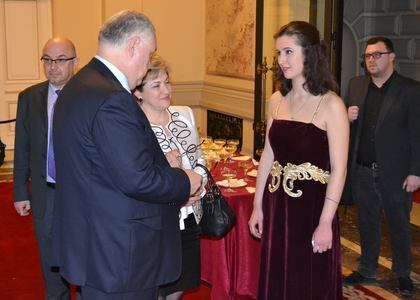 Wednesday, 25 March 2015 , ora 10.07
Rounds of applause, flowers, smiles, congratulations - in short, a celebration. On Tuedsay, 24th March 2015, Radio Romania Music had its 18th anniversary which was celebrated in its well-known way - through high-quality music! The Cotroceni National Museum hosted the anniversary recital performed by the young pianist Sînziana Mircea.

'Happy birthday, Radio Romania Music! I hope that you will keep on broadcasting for many, many years on and that you will have lots of devoted listeners, like me . It was a great honour for me to perform this recital on the occasion of Radio Romania Music reaching the age of majority. The atmosphere at the Cotroceni Palace was wonderful, the audience was very welcoming, the piano was very good, so it was a memorable night altogether. I will never forget this amazing concert. '

The programme contained three of Frederic Chopin's works, Ave Maria by Franz Schubert in Franz Liszt's arrangement, and the cycle Pictures at an Exhibition by Modest Mussorgsky - each opus ended with loud applauds from the audience at the Cerchez Hall. Adina Rențea, the Director of the Cotroceni National Museum was also part of the audience:

'It's not easy to perform a recital for the anniversary of such an important radio station, the only one which broadcasts classical music in Romania, a station with so many listeners, and I realise that the pressure on her was great. She chose beautiful songs, but very hard ones. I heard somebody in the audience saying the same thing: beautiful, very good performance, but very hard songs. Happy birthday! I hope we shall meet here at the 25th anniversary as well. '

'I am thrilled. I've known her since she was only a child. The Hall is extraordinary, the programme was very well chosen. Thank you! I always choose Radio Romania Music because I find it relaxing, because I can sense the culture, the music which is really authentic, the sincerity, the good taste and decency, all of which are extraordinary. It's the best it can get!'

'The recital - a success! A talented girl, you can tell that she's been to a German school… by the certainty of her touches. The fact that the Radio thought of making this partnership with the Cotroceni Museum is very interesting. It's extraordinary that the Radio continues to have in mind the previous performances, honouring them and eventually extending them as well. Radio Romania Music keeps on developing and that's amazing. Classical music is an absolutely essential aspect. '

Mihaela Doboș, director and founder of Radio Romania Music also gave her opinion about the anniversary recital held at the Cotroceni National Museum:

'It was a recital that I enjoyed a lot. Sînziana Mircea is a serious pianist, she handles the keyboard with great easiness, lucidity and passion - she has a culture not only of the sound, but of the voices too, and she knows how to blend it all together, which is what music really means. At its 18th anniversary, Radio Romania Music honoured both its age and existence. My only hope is that the high standards of the broadcasted programmes will be kept in the future, and that the Radio will be aware of the fact that it offers the best that there is in music for the audiences. Tonight and on many different occasions as well I arrived to the conclusion that Radio Romania Music honours its promises. It has been founded for the listeners and it keeps on being addressed to the listeners of a certain intellect, a certain acceptance level and openness to all kinds of values. Happy birthday!