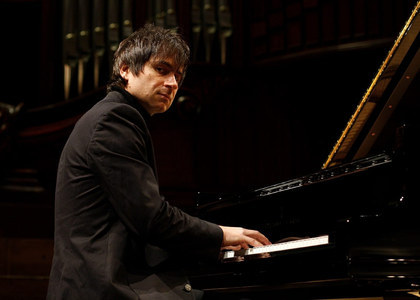 Friday, 27 March 2015 , ora 9.32
The occasions to listen live to the one of the musicians whose recordings we broadcast on Radio Romania Music are very rare - we had such an opportunity on 26th March, 2015, when the pianist Piotr Anderszewski held a recital at the Flagey Hall in Brussels.

He played two works by Johann Sebastian Bach, the English Suites No. 3 BWV 808 in G Minor and No. 6 BWV 811 in D Minor in such a way that he made us believe that the music was being composed at that very moment, everything was happening so naturally; and the Polish pianist gave the impression of a man with more that only ten fingers - the melodies and counter melodies of Bach's poliphony were both perfectly perceptible. The feeling I had when listening to Janine Jansen, that of just listening to the beautiful way in which the artist on the stage was playing instead of taking down notes of my impressions, came back to me at Piotr Anderszewski's recital ; to this the clarity, the serenity and the wonderful interweaving of Bach's music were added.

The hapsichord for which Bach composed the English Suites lacked the capacity to sustain the musical notes long enough: the sound would disappear quickly after the key was pressed, much faster than in the case of the piano. This is why preclassical music for this instrument is full of ornaments - little grace-notes, little scale pieces , quavers executed around a main note in order to create the auditive impression of a long time value. Especially in the sections written with little nuances, which are so improvisational and in such a slow tempo as if Bach was playing for himself, quietly, Piotr Anderszewski managed to do these ornaments with an out of the ordinary graciousness and precision.

The pianist continued his recital with the work Métopes by Karol Szymanowski, akin to Bach's music through the improvisational atmosphere and through the overlapping of various sonorous plans. Anderszewski is renowned for the bond with the music of his compatriot, which could also be seen in the difficult score performed on 26th March last but not least because the melody could be made out from a very dense and rich structure (without these two terms being synonymous).

Szymanowski and Anderszewski both did a conjugation between harmony and dissonance of such quality that you could not tell if, while the pianist was on stage, someone else was studying not very far away by chance, precisely a piece that matched the live recital.

There followed the theme with variations in E flat Major by Robert Schumann, Geistervariationen, ʻGhost Variations', which does not appear too often on the concert bill or in albums . Schumann's last work was composed before he was admitted to a lunatic asylum; it was inspired to him, as he believed, by the ghosts; and it has a very classical sound to it. However, as it often happens to parts for piano solo by Schumann, you can not tell whether you like it or you are confused by it.

Eventually coming back to Bach, I also remarked the fact that the ease with which Piotr Anderszewski interpreted the music was, paradoxically, tiresome in its development; a hesitation, a mistake in the continuous successions would have made them more human, would have given us the chance to breathe. During the recital performed in semi-darkness , with a faint light hardly revealing the piano keys, the reduced intesities of the pianist even made the movement of my pen on the paper become noisy, and an occasional cough was explosive.

After many applauds and two encores, a Hungarian dance by Béla Bártok and a bagatelle by Ludwig van Beethoven, we could all leave the Flagey Hall, both Piotr Anderszewski and we, the audience; and I for one, did it with the regret that such a moment had come to an end.