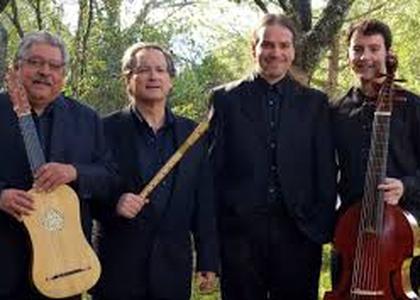 Wednesday, 22 April 2015 , ora 10.06
To honour the 400 years that have passed since the release of the second part of the Don Quijote de la Mancha novel which made its author - Miguel de Cervantes - famous, the cultural institute bearing his name organized a musical soiree - themed Cervantes and Music, Renaissance and pre-Baroque works, cropped, of course, from the Spanish creation - at the Athenaeum, in Bucharest on Tuesday, 21th April, 2015.

Beside the interest awakened by the homange paid to Cervantes through the music of his time, what made the event even more attractive was inviting the 'Zarabanda' Quartet, made up by performers specialized in playing period instruments, so we listened to Álvaro Marías (flauto dolce, also the ensemble's leader), Alejandro Marías (viola da gamba), Gerardo Arriaga (vihuela) and Jordán Fumadó (clavecín) in an attractive show. A quite numerous audience, but... not very 'trained' (proof being the rounds of applauses between the sequences of some series and the 'walks' some took during the show), discovered, on this occasion, composers who are virtually unknown in Romania, in scores often filled with harmony and charming rhythms. They alternated lyrical, evocative pages, ballad-like , suggesting the poetic melancholy of the minstrels and social dances inspired from Hispanic folklore, accurately and sometimes skillfully rendered by the members of the quartet, both remarkable in their ensemble's coordination and in their high quality soloistic moments.

As Alvaro Marias seemed gone on covering the richly ornamented works and the complicated structures, neglecting the phrasing and the expressive lines, as if without noticing (or being bothered by) the constant undertone canto, both clavecinist Jordan Fumado (also part of the concerts of famous Jordi Savall and some important Spanish orchestras), and Gerardo Arriaga (a highly specialized Mexican, but mainly in love with the guitar or, this time, with the vihuela) performed brilliantly, displaying a superb sound, adequate stylistic knowledge,a fluence of logically followed speech and especially an expressively diverse palette.

Alejandro Marias brought rigour and accuracy with his viola da gamba to the performance, the quartet maintaining coherence and managing to discretely overcome lacks of synchronization caused by the alert tempo favoured by Alvaro Marias, who was mostly in the foreground. That's precisely why opuses by Ortiz, De Cabezon, Navarez, De Selma y Salverde, Navarez, Fuenllana, Fontana, Mudarra, Falconieri and by the Anonimi of the XVIth century were chosen, having the much appreciated spicing of simple, nostalgic and glee-touched sones that we find in romanzas and in dancing music, such as, the pavane , gallarda and sarabande - about which, anticipating an encore, Alvaro Marias told us with the same verve and passion that has characterized him throughout the years, as a member of the quartet that, on purpose, bears the name of that dance.

The references to Cervantes and his characters were emphasized either through the quote that ruled the evening - 'Where there is music, there can be no evil' - taken from a line by Sancho Panza, or through the sounds of the vihuela, an instrument that Don Quijote himself used to play in his short moments of respite, as Cervantes said in the volume that has now reached its 400 years of glory properly celebrated with different events of which the programme offered by the Spanish 'Zarabanda' Quartet was a part, at the invitation of the 'Cervantes' Cultural Institute, belonging to the more ample 'Cervantes Week' (20th-24th April).