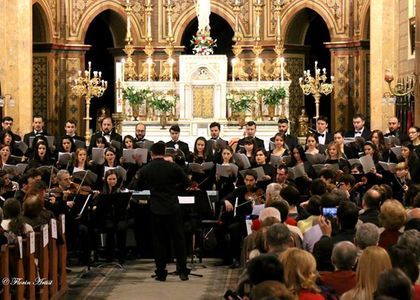 Monday, 27 April 2015 , ora 9.29
Already at its seventh edition, the 'Keys' Festival, organized by the National Music University of Bucharest, was opened on Saturday, 25th April, 2015, with an Italian baroque music concert that took place at the 'Saint Joseph' Cathedral; a location that matched the music but that also proved itself to be visioned, since the event was attended by a huge audience that, in the sacred environment of the church, was witness to a highly skillful musical performance.

Antonio Vivaldi and Baldasare Galuppi were the composers whose music echoed in the impressive Romano-Catholic edifice in Bucharest, performed by the Conservatory's Baroque Orchestra and the choir made up by MA students of the same institution. A version that was very close to the traditional performances of the baroque instrumental music, just the way it can be listened to nowadays everywhere in Europe. That's also because the conductor was Giulio Prandi, director of the 'Ghislieri Choir and Consort' Old Music Academy of Pavia, who prepared, for a week, the beforementioned ensembles that, not used to baroque performing, managed to assimilate in a couple of days crucial notions that targeted firstly the bow technique, regarding the instrumentalists, and the proper emission way for the choir and the soloists of the two vocal-symphonic works presented: Antonio Vivaldi's Magnificat and Baldasare Galuppi's Dixit Dominus. Very important was also the presence of two instrumentalists from the ensemble trained by Giulio Prandi in Pavia: concertmaester Alberto Stevanin and prime-cellist Alberto Guerrero.

Here's what conductor Giulio Prandi said about this experience:

It was an extraordinary experience - for which I'm grateful to the rector of the National Music University and to all of the professors who were involved - because I've found a group of extremely talented musicians, with a solid technique and we've decided to make no compromises in regard to our vision, speaking not only of baroque music, but also of this specific repertoire, that being the sacred Italian music. At the beginning, they were a little confused since, although they played very well, it wasn't the music they were used to. They have made more and more progress throughout the days, they have become confident and, inthe end, it has turned out to be a great collaboration and we're very happy not just with the result, but with the whole process. We've been moved by their desire to learn, by the way they tried to put into practice all our suggestions . I haven't worked alone, but with my concertmaestro - Alberto Stevanin - and prime-cellist Alberto Guerrero. I can assure you that everything was impressive and touching.

Overall, a successful evening, a concert that the audience liked, opening a festival that keeps growing with every edition, managing to capture an increasingly larger audience.