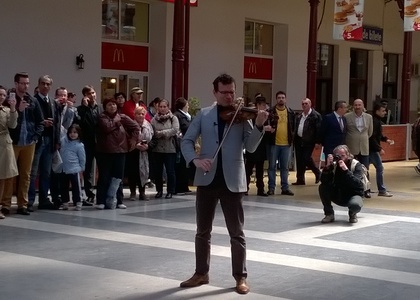 Thursday, 23 April 2015 , ora 9.31
The violonist Alexandru Tomescu has been today, on 23rd April, 2015, the protagonist of a sensational recital, hosted by...the North Railway Station in Bucharest. The event took place within The Day of the Railway Workers, celebrated from 1999 until this day. The first Romanian railway station administration was create on 23rd April, 1880, due to a decree issued by the Prince of Romania, Carol I and I. C. Brătianu. In 1999, at the initiative of the National Railway Company CFR SA, The Day of the Railway Workers becomes a festive day by law.

To honour this celebration, The North Railway Station in Bucharest has been the most important railway station in a cultural location for half an hour, being animated with George Enescu`s music, that was performed by Alexandru Tomescu on the Stradivarius Elder-Voicu violin.

"This is a great idea. I have requently heard lexandru Tomescu's name, but I have never had the chance to see him in a concert and I am quite delighted. He takes us out of our tedious daily rutine. It`s fantastic. It`s a commendable idea."

The recital had a double purpose, because Alexandru Tomescu announced with this opprtunity the beginning of the The National Stradivarius Tour, with compositions signed by our great George Enescu. About today`s audience at the North Railway Station in Bucharest, Alexandru Tomescu stated:

"The North Railway Station in Bucharest is a familiar place for me; growing up in its neighbourhood, every sound that comes from a train in motion is more than familiar to me, therefore I somehow feel at home here. I was very surprised to see that I have been expected. I have chosen to perform a song that is very dear to me, The Fiddler by George Enescu; the choice is not randomly made, because next week I will start a completely extraordinary tour calledStradivariu-Enescu Experience, during which I will perform George Enescu`s works for violin and piano together with Eduard Kuntz and this Fiddler is the opening song of the tour. Another of George Enescu`s favourite pieces is the Prelude in G minor from the 3rd Partition by Johann Sebastian Bach; and I finished with another piece from George Enescu`s repertoire, namely the Caprice No.16 by Niccolo Paganini. A few pieces for a repertoire that could be performed on any concert stage and which I find suitable for the vast audience attending the concert organized here at the North Railway Station in Bucharest."